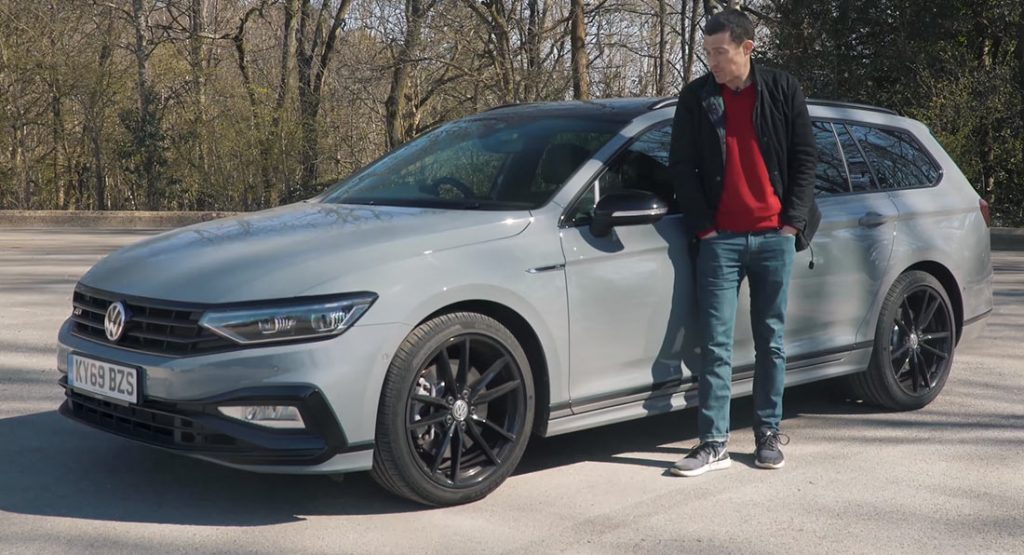 
The VW Passat may not be the most desirable vehicle in the German carmaker’s range, but as Mat Watson from CarWow recently discovered, it’s quite an impressive car in Passat Estate R-Line Edition guise.

The special edition was introduced by VW after last year’s Geneva Motor Show and is based around the facelifted iteration of the Passat. It is quite the head-turner, thanks largely to the stunning Moonstone Grey paint finish.

Other parts help distinguish the Passat Estate R-Line Edition from lesser models in the Passat range. These include a gloss black roof as well as gloss black across the side window frames, grille, 19-inch wheels, wing mirrors, roof rails, and rear diffuser.

As for the interior, it features a set of R-Line sports seats up front that include Nappa leather in the center section and carbon leather for the side bolsters. There is also an ambient lighting system as well as stainless steel pedals and scuff plates.

The car tested here came outfitted with the petrol engine as well as the 4Motion all-wheel-drive system and a dual-clutch automatic transmission. It is capable of hitting 60 mph (96 km/h) in a respectable 5.8 seconds according to VW, but Watson was able to record a 0-60 mph time of just 5.2 seconds.

LONDON — Nissan will resume vehicle production at its UK plant in early June, the automaker said in a statement.

The plant is the largest car factory in the UK and Nissan’s largest in Europe. The Qashqai and Juke SUVs, and the Leaf electric car, are built at the facility in Sunderland, northeast England. Production fell 22 percent to 346,535 units last year.

Vehicle production at the plant was halted March 13 due to the coronavirus outbreak. About 150 employees returned to work last week to begin engine production, Nissan said.

Nissan is waiting to see how car sales recover before ramping up the factory to full production.

“Our goal is to navigate through this crisis while maintaining activities critical for business continuity and to make sure we are prepared for the time when business resumes in Europe,” the company said.

Nissan will reopen its other European assembly plant in Barcelona, Spain, plant on May 4, it said last week.

Nissan said has spent recent weeks carrying out extensive risk assessments and benchmarking with other manufacturers around the world to put in place safety measures. The new protocols are currently being piloted at Sunderland by 50 staff in the powertrain unit.

Other automakers are reopening their UK plants ahead of Nissan.

Jaguar Land Rover, the UK’s largest auto manufacturer by production volume, will restart production at its Solihull factory on May 18, focusing on exports to China. Its plants in Halewood and Castle Bromwich will remain shut for the time being.

Rolls-Royce will resume output on May 4.”We are receiving orders from our customers and we are heeding the British government’s call to resume production and support the British economy,” CEO Torsten Mueller-Oetvoes said.

Aston Martin will restart production on May 5 and Bentley’s factory will begin building cars again on May 11.

UK car production fell by 38 percent to 78,767 vehicles in March because of account the shutdowns, the SMMT auto association said on Thursday.

A sleeker, sportier 2020 E-Tron Sportback is coming to join the E-Tron in Audi’s growing EV portfolio this summer.

The E-Tron Sportback is a coupe-like version of the E-Tron battery-electric SUV that went on sale in 2018, and it will sell at a slight premium, with Audi announcing Thursday a starting price of $78,395 versus $75,795 for the regular E-Tron. Both figures include destination.

The E-Tron Sportback debuts with the same mechanicals as the E-Tron, meaning a dual-motor setup delivering 355 horsepower (402 hp with Boost Mode) and all-wheel drive—a setup good for 0-60 mph acceleration in 5.5 seconds. A sportier S variant with a tri-motor setup good for 496 hp is also coming, though Audi hasn’t said when it will land.

The battery in the E-Tron Sportback is a 95-kilowatt-hour unit and Audi quotes an EPA-estimated range of 218 miles. The regular E-Tron is rated at 204 miles by the EPA, with the extra miles of the E-Tron Sportback likely due to its slipperier shape. Using a high-speed charger, an 80-percent charge can be completed in about 30 minutes, according to Audi.

Also included as standard is adaptive air suspension, 20-inch wheels, heated and cooled seats, a digital instrument cluster, and a surround-view camera. There’s also standard navigation with a feature that estimates where the vehicle can travel based on its current charge state.

To mark the E-Tron Sportback’s market arrival, Audi is offering a special launch edition that will come in an exclusive Plasma Blue shade of paint, together with orange brake calipers, Monaco Gray Valcona leather trim, and a few additional special touches. Numbers will be limited and pricing for this model hasn’t been.

Production of the E-Tron and E-Tron Sportback is handled at Audi’s plant in Brussels, Belgium.

Audi plans to have 20 EVs in its lineup by 2025. Others in the pipeline we know of include an E-Tron GT super sedan, Q4 E-Tron compact SUV, and an A4-sized model that might end up replacing the A5.

These Guys Build $100 Driveable And Pedalable Supercars Out Of Cardboard

The COVID-19 pandemic and its resulting impact on the economy are going to leave a number of dealers in crisis. The most stable of dealerships may be left vulnerable and — absent a definitive plan to create, protect and preserve liquidity — the dealer pool may be considerably culled.

Unlike other industries, the auto industry wasn’t demonstrating robust growth prior to this unprecedented crisis. Dealerships have been increasing leverage while managing declining margins.

Throughout 2019, in good overall economic times, our firm consulted for a number of dealership groups experiencing major financial hardships. The lesson that became obvious was that dealers needed to face their problems early and head-on, not waiting to see if the next month would get better. Those who delayed confronting their problems saw a mild illness turn into a terminal disease. The dealer mindset has always been to “sell their way out of a problem.”

Optimism is helpful, but it is not a strategy. In challenging times, intelligent reduction of expenses and restructuring of debt becomes urgent and essential to survival.

Many lenders spent the past few years working feverishly to deploy capital into flooring lines and other dealership secured loans. Private equity firms entered the industry with abandon. Automotive real estate investment trusts have grown their dealership portfolios during this last 10-year expansion.

Even with all of that enthusiasm, auto industry sales had leveled off prior to anyone hearing the term COVID-19, peaking in 2016. The most savvy did not see this crisis coming. No one budgeted for the apocalypse.

As a result, many dealers have been caught without adequate working capital to weather the storm. No lenders conducted stress tests to prepare for a cataclysm of this magnitude.

Just as dealers are forced to face this hurdle head-on and not hide from the inescapable, this is not a time for lenders to pull their boilerplate forbearance agreements off the shelf, follow their generic workout checklist or play hardball. It is not a solution for dealers to go out of trust and hope good times are on the horizon.

Like the rest of the nation, dealers and lenders must work together to return to some new sense of normality. No one knows how long the shutdowns will continue or how consumers will respond as the economic curve flattens out along with the COVID-19 curve. As of this writing, the contagion and the economy show few signs of improvement.