Neoen, a French energy company, announced a massive new 400 MWh Tesla Megapack project in Australia. It’s one of the biggest energy storage projects in the world.

Neoen actually played a part in that.

Before the Megapack, Tesla had the Powerpack, and it was selected by Neoen for one of the first-ever large-scale energy storage projects using lithium-ion battery cells.

Neoen owned the project and it proved to be highly successful and profitable. Lately, Neoen has announced new projects, and this time, it is using Tesla Megapacks.

Neoen, one of the world’s leading producers of exclusively renewable energy, has provided notices to proceed to battery storage experts Tesla and to balance of plant contractor UGL, signalling the start of construction for its 200 MW / 400 MWh Western Downs Battery in South West Queensland, Australia. In line with the company’s develop-to-own business model, Neoen will be the long-term owner and operator of the asset, which is its fourth big battery in Australia.

At 400 MWh of energy capacity, it will be one of the most significant Tesla Megapack projects in the world.

The system will be used to provide grid services and help stabilize the Australian grid, which has been increasingly adding renewable energy capacity.

Neoen wrote about the project:

The battery, consisting of Tesla Megapack systems, will leverage the existing infrastructure of Neoen’s Western Downs Green Power Hub which includes a 460 MWp solar farm, currently nearing completion. It will be located next to the Western Downs substation with Powerlink delivering the connection works, including a dedicated high-voltage line which will connect the battery to the transmission network. Early construction works are underway, with the asset expected to start operating in the Australian summer of 2024/25.

The project will bring Neoen’s energy storage in operation or under construction to 776 MW / 1279 MWh – with most of it being from Tesla Megapacks.

Maserati last year revealed a vehicle that currently has no direct rival – the new GranTurismo in Folgore full BEV guise, basically an all-electric version of its brand new continent-crossing coupe. The GranTurismo Folgore is the most powerful model in the lineup, it has three motors and all-wheel drive, and it can apparently hold its own around a track.

Autocar editor Matt Prior got the chance to drive the GT Folgore as part of an official Maserati event, and his first impression is quite positive, even though he drove the car on quite a wet track and couldn’t really put all the power down. The vehicle he drove was a prototype, so it’s not quite finished, as the vehicle is officially expected to enter production in around four months’ time and Maserati is putting the finishing touches.

Interestingly, the three motor setup could produce a lot more power – up to 1,207 horses – but it’s being held back by the battery. It’s a 92.5 kWh pack (with a usable capacity of 83 kWh) that supports up to 800 volts; it allows the vehicle to charge at a peak rate of 270 kW, but it can’t provide enough juice to get the most out of the motors, so we assume Maserati is planning an upgrade in the not too distant future.

Overall, according to this prototype track review, the vehicle holds a lot of promise, and it doesn’t really have rivals. As reviewer Matt Prior points out in the video, its closest rival is the Porsche Taycan, and they aren’t exactly similar, given that the Maserati is a two-door that should have a slightly more long-legged character compared to the Porsche – comparing these two EVs should yield interesting results.

Tesla owners give back to local communities for the Holidays

Tesla owners all across the nation found ways to help their local communities this holiday season. The holidays are tough on families in need, and the kindness of caring strangers often helps make the season a bit brighter and merry for those families who are struggling.

#Buffalopal youth were thrilled to be the guests of the Tesla Owners club New York State 3rd annual toy drive outside #GigaNY
Thank you to @TOCNYS members for spreading joy this holiday season to our Youth! #supportyouth #teslacares #manythanks #seasonofgiving pic.twitter.com/OrvSszcAFm

John P. Weiksnar John Weiksnar said it was a success and credited the Tesla staff and the nonprofit for coordinating.  In November, the New York Tesla Club also collected 255 pounds of nonperishable food and hygiene items for FeedMore WNY, which was once two separate nonprofits that merged into one. Initially, it was Meals on Wheels for Western New York and the Food Bank of Western New York.

@elonmusk Our third annual #TOCNYS toy drive outside #GigaNY on 12/10/2022 was a total success! Many thanks to Tesla staff & @PalBuffalo for coordinating, and to @TOCNYS members for morphing frunks full of toys into instant smiles. . . . pic.twitter.com/LrJxjKe56n

On the other side of the country, The Tesla Owners Club of San Joaquin Valley held a toy drive for Toys For Tots at Kettleman City, California.

Our 3rd #teslatoydrive with @ToysForTots_USA is coming up Dec 3rd at Kettleman, I sincerely hope you can make it. #Tesla $TSLA pic.twitter.com/QZucVTAawf

The Tesla Owners of Silicon Valley Club held its holiday toy drive and block party at Palo Alto Firestation #2. This was their second annual holiday drive in partnership with the Palo Alto Fire and Police Departments, which closed off the street for the event.

“Seeing the consistency in which the Tesla community comes together every year to give back to those in need, is inspiring. Saving the planet and making life on it better can be one and the same.”

As the Holiday 🎄🎅🏼 season commences, on behalf of our @Tesla club, from Fremont to the 🌍: Happy Holidays. This was our own version of Santa Mode. Cargo Vans full of gifts! Santa photos for all! So proud to do our part in spreading cheer 🎁 in partnership with @ToysForTots_USA pic.twitter.com/GOclFP0FL8

In Ohio, the Tesla Owners Club of Columbus raised funds to support Nationwide Children’s Hospital, which has helped some of its club members and the community. Club member Doug Sherwood shared his story.

“Eight years ago, my son was born six and a half weeks early. He was born at four pounds and six ounces. Children’s Hospital took care of him–24/7 care–and helped us feel comfortable holding him and caring for him.”

Our club is raising funds to support @nationwidekids – they’ve personally helped some of our members’ families, and support many more in our community.
Please consider donating to support our toy drive this year – all proceeds go directly to Nationwide Children’s hospital! pic.twitter.com/bY2nsqAOmn

Disclosure: Johnna is a $TSLA shareholder and believes in Tesla’s mission.

Your feedback is welcome. If you have any comments or concerns or see a typo, you can email me at johnna@teslarati.com. You can also reach me on Twitter at @JohnnaCrider1.

Tesla owners give back to local communities for the Holidays 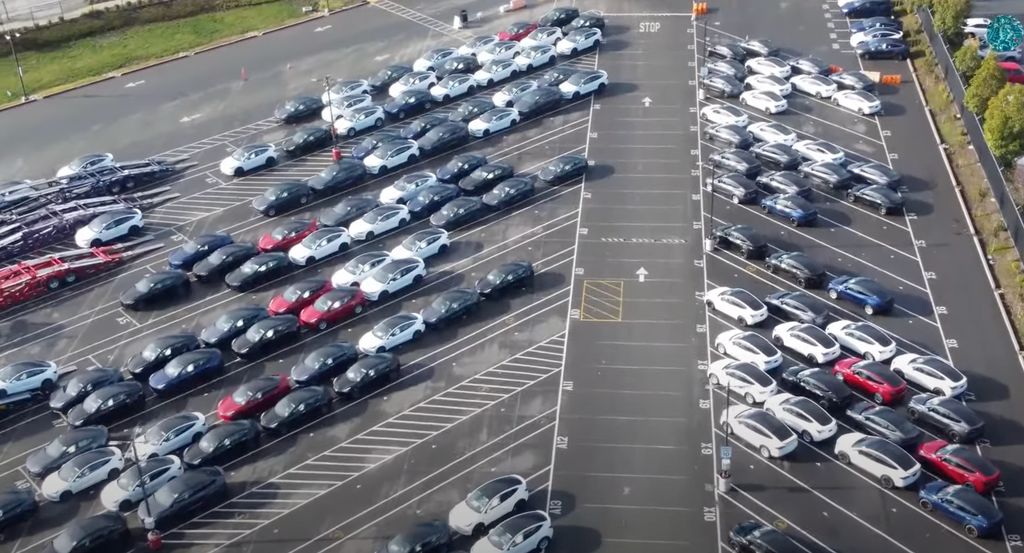 This year Tesla announced its plan to exceed 1-million vehicle sold globally in 2022 and one way it’s making sure to achieve that goal is to push for more production towards the end of the year. Interestingly, even though it will easily achieve that goal, given that it had already gone beyond 900,000 vehicles delivered through the third quarter of this year, it looks like the manufacturer is still doing its now traditional end-of-year production push.

Thanks to a recent drone flyover of the Fremont factory in California, we can see that the facility’s delivery center parking lot is mostly packed with brand new Teslas awaiting delivery. The footage was shot two days ago, on the morning of December 28, and it shows the customer delivery area parking lots almost completely full, suggesting that the manufacturer had been pushing hard for higher production numbers as the end of 2022 drew closer.

Tesla built more cars in each quarter of 2022 compared to last year. Q3 has so far been the best this year, with 365,000 vehicles produced of which it delivered around 343,000 cars, but we anticipate this will be surpassed by Q4 when the manufacturer is expected to build and deliver around 425,000 units.

Tallying everything up, we therefore expect Tesla’s total number of deliveries for 2022 to be around the 1.3-million mark.

Tesla CEO Elon Musk sent a companywide email on December 28 telling employees that “since we have a lot of cars arriving at the last minute, it is important to rally hard and do everything we can to get our cars to customers who have ordered them before midnight on Dec. 31. Also, every incremental car we produce that can be delivered in time also matters. Please go all out for the next few days and volunteer to help deliver if at all possible.”

The Tesla boss also addressed the falling price of Tesla stocks, which he believed could affect workers’ morale and possibly hinder production. In the same email, he wrote that they shouldn’t “be too bothered by the stock market craziness. As we demonstrate continued excellent performance, the market will recognize that. Long-term, I believe very much that Tesla will be the most valuable company on Earth.”

Tesla employee on going back to Rolls-Royce: one of the “toughest decisions in my life”

After leaving Rolls-Royce, he worked at Tesla for two years. He began his career at Tesla in January 2021 and started as a Global Supply Manager, Construction. By the end of December 2022, he had worked his way up to Group Manager of Construction Procurement before leaving to go back to Rolls-Royce.

He shared his thoughts about working for Tesla, leaving the company, and his inspiring team at Rolls-Royce. He also called out the German media for its biased coverage of Tesla.

“Recently, I had to make one of the toughest decisions in my life – shall I leave Tesla, this fascinating company that is transitioning automotive towards more sustainability, which I love to work for and where I am part of an exceptional team that is willing to do the impossible. And shall I go back to Rolls-Royce, my by no means less awesome previous employer, to join a project where Rolls-Royce is pioneering electric aviation. It was a brutal decision-making process which took me quite some time, many discussions with my family, friends and (former) colleagues and sleepless nights,” Lohse wrote.

He added that he’s spent almost two months back at Rolls-Royce and that he’s met an “inspiring and passionate team” that is pushing the electrification of the industry. As for the German media coverage of Tesla, he shared what it was really like working there.

“One thing that’s important to mention here because of the very biased media coverage in Germany about Tesla and how it is to work there – this company is great! The last two years were the best and most intense I’ve ever had in my professional life. It was the Tesla lifestyle. Have a look at the current vacancies (especially in Construction Procurement, these folks are the best, I promise!). And don’t be afraid to apply for a job at Tesla. It will be a lifetime experience. And if you’re looking for a job anyway, also check out the vacancies here at Rolls-Royce!”

Tesla, which is a key leader in the automotive industry for electric vehicles and the loudest voice for sustainability, is one of the leading companies to work for. In May, the electric carmaker announced that it received three million job applications in 2021 in its annual Impact Report. And many employees leaving Tesla either are hired on by competitors or often find themselves starting their own companies.

Disclosure: Johnna is a $TSLA shareholder and believes in Tesla’s mission.

Your feedback is welcome. If you have any comments or concerns or see a typo, you can email me at johnna@teslarati.com. You can also reach me on Twitter at @JohnnaCrider1.

Tesla employee on going back to Rolls-Royce: one of the “toughest decisions in my life”