Rivian Automotive Inc., the EV startup backed by Amazon.com Inc. and Ford Motor Co., is in talks with the U.K. government on building its first manufacturing plant outside the U.S. near the English city of Bristol, Sky News reported.

The investment would probably include a large state-support package, but the U.K. faces competition from Germany and the Netherlands for the site, Sky cited industry sources as saying. Talks with the U.K. government are at an early stage, and an investment could be worth more than 1 billion pounds ($1.4 billion), it said.

Prime Minister Boris Johnson has taken a keen interest in the progress of the talks, although they are not yet at an advanced stage, Sky reported. Attracting environmentally friendly investment in the U.K. is a key part of Johnson’s plan for post-Brexit Britain and his climate agenda.

Gravity, a 616-acre campus near Bristol, southwest England, has been identified by Rivian as a possible location for the new plant, Sky said.

The company is also exploring locations for a second plant in the U.S. Bloomberg News first reported Rivian’s plans for a European factory in November. 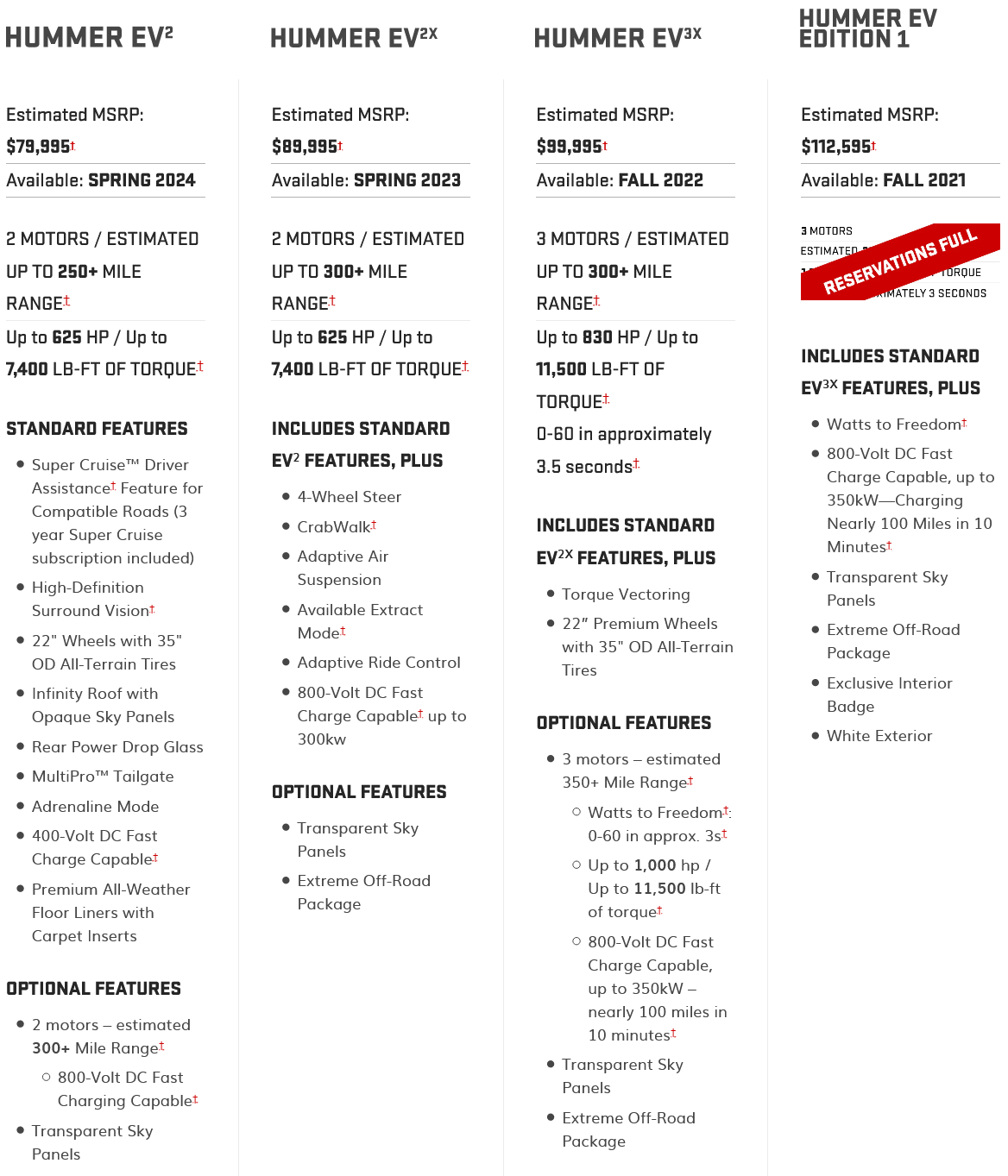 According to Marques Brownlee, those are the only two working units in the world. They both look massive in person – huge, tall with high clearance, and heavy. The pickup is expected to exceed 9,000 lbs (4,082 kg). It’s so big that it requires three windshield wipers.

Despite its size and weight, the new Hummer will be very quick, comparable to a sports car, with 0-60 mph in just around 3 seconds.

The GMC Hummer EV offers tons of storage, including a big front trunk. Among the cool features noted by Marques Brownlee are lights that indicate battery state-of-charge.

GMC appears to be very proud of its new Hummer and flooded it with logos everywhere (32 according to MKBHD).

The fully loaded Edition 1 of the GMC Hummer EV pickup is coming on the market before the end of this year, while the SUV is to follow in 2023. 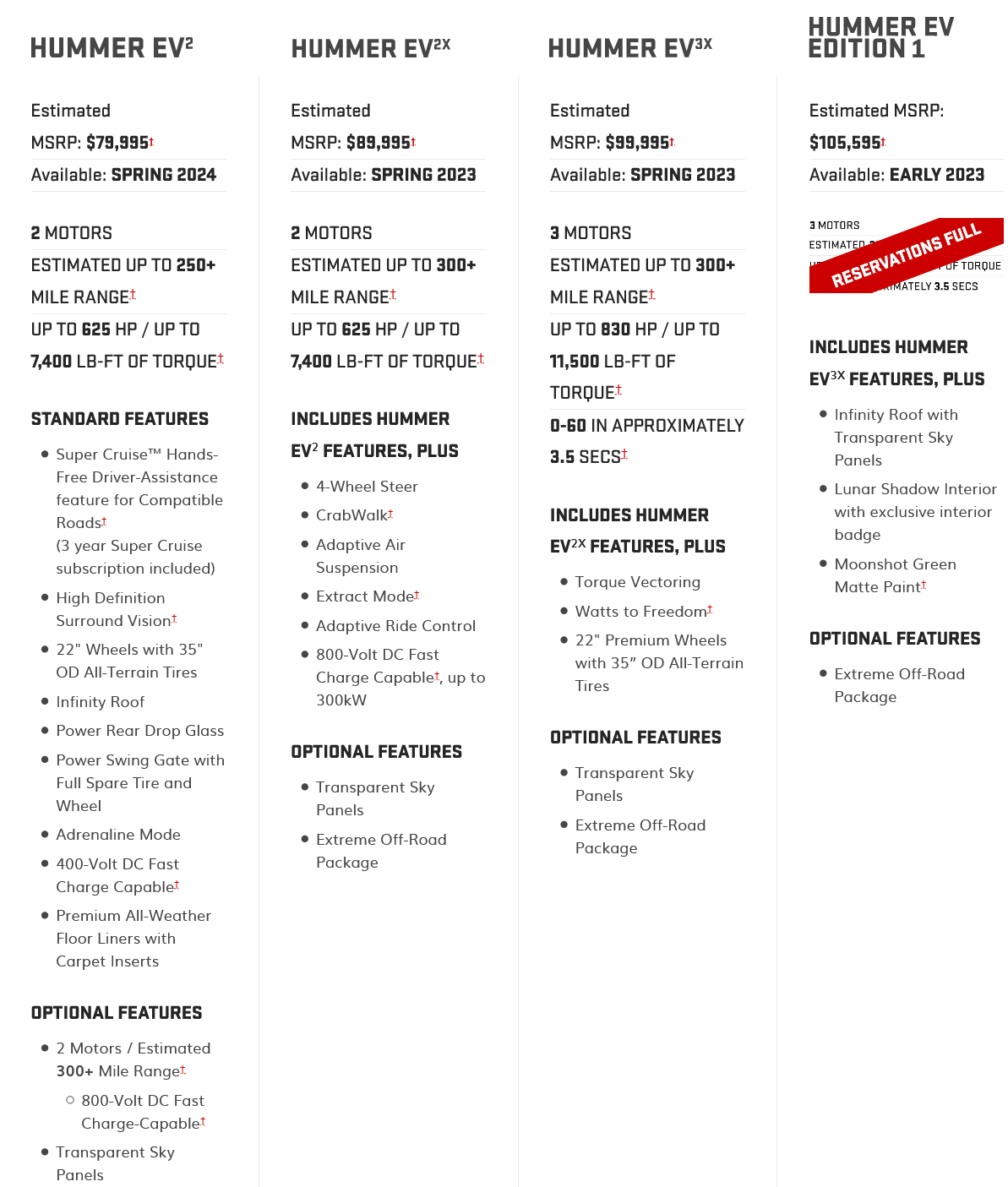 
We doubt there are many people cross-shopping between a Dodge Charger Hellcat Redeye and a BMW M5 CS, but as these are two of the most potent super sedans on the market, Throttle House decided to pit them against each other for a series of performance tests.

If you were to simply look at the spec sheets, you could be excused for thinking the Dodge would leave the BMW in its wake. After all, the Charger Hellcat Redeye is powered by a supercharged 6.2-liter V8 churning out 797 hp and 707 lb-ft (958 Nm) of torque. It is the world’s most powerful mass-produced sedan and can hit 60 mph (96 km/h) in the mid-3-second range while sprinting down the quarter-mile in as little as 10.6 seconds at 129 mph (207 km/h).

By comparison, the BMW M5 CS features a twin-turbocharged 4.4-liter V8 with 627 hp and 553 lb-ft (750 Nm). However, after watching this video, one would be excused for thinking the German automaker might have understated these figures.

Off the line, the M5 CS has the obvious advantage thanks to all-wheel drive and a potent launch control system so in the first race, it absolutely destroys the Charger. In the second race, the M5 CS driver doesn’t use the launch control but still easily takes the victory. Perhaps the most telling test is a rolling race between the two where the added grunt of the Charger should help it secure a win. However, it doesn’t, and the BMW actually proves once again to be faster.

The duo are then tested around a track and while we won’t spoil the result, one of them lapped the circuit faster that a C8 Corvette Z51.

The 1973 MGB featured on this episode of “Jay Leno’s Garage” is responsible for keeping many of its kin on the road. That’s because it serves as a testbed for parts supplier Moss Motors. Robert Goldman, chairman of Moss Motors, joined Jay Leno to discuss the car and its role with the company.

With a production run spanning two decades, the MGB is one of the most popular British sports cars of all time. The MG brand survives today under Chinese ownership, but primarily sells sedans and crossovers now. While time has inevitably removed some cars from circulation, the MGB still makes up a sizable portion of Moss Motors’ business, Goldman said.

This 1973 model was built about halfway through the MGB’s production run, but before the addition of oversized rubber bumpers, a raised ride height, and primitive emissions equipment required by United States regulations in subsequent years.

While it has a clean, stock appearance, the car has a few aftermarket parts, including a prototype Panhard rod, a supercharger for the inline-4 engine, and a 5-speed manual transmission that uses Mazda MX-5 Miata internals, Goldman said. Braking is handled by Wilwood discs up front, and drums in the rear. Switching to rear disc brakes wouldn’t have a major impact, Goldman said.

Inevitably for a discussion of vintage British cars, the topic of electrical issues came up. Goldman said the real problem with MGB electrical systems today isn’t flaws baked in from the factory, but years of use and abuse. This car also has a modern alternator, electronic ignition, and a high-torque starter for added reliability.

Watch the full video for more tips on upgrading classic cars, and to see Leno drive this modernized MG on the streets of Los Angeles (with the top down, naturally).

What kind of car is the 2022 Hyundai Accent? What does it compare to?

It’s right in the middle of our pack, with a TCC Rating of 5.0 out of 10, with its best score in gas mileage. (Read more about how we rate cars.)

Not much, other than the lack of the former manual-transmission option. The Accent’s pert body tucks in enough space for four passengers and saves room for an excellent 5-year/60,000-mile warranty with three years or 36,000 miles’ worth of free maintenance—all for less than $20,000. The graceful but anonymous good looks, inside and out, are a bonus at that price.

The Accent’s 120-hp inline-4 and CVT won’t earn any major kudos, unless you steal the drivetrain and retrofit it into a go-kart. It’s buzzy and has meager output, but you’re not paying for speed here: you’re paying for the ability to park easily and to steer clear of the service bay as long as possible. It rides well enough for highway trips, but it’s at its best in point-and-squirt traffic and short-distance runs across town.

Four adults can fit inside, and they can bring along 13.7 cubic feet in the trunk. The interior’s fine for the price, with room for smartphones and iced lattes and a spill-resistant interior lined in plastic and durable-looking cloth.

Crash-test scores haven’t been a positive or a negative, but you’ll have to spend the max to get the Accent Limited and its standard automatic emergency braking, which we wouldn’t go without in any new car.

How much does the 2022 Hyundai Accent cost?

The Accent SE costs about $17,500 and comes with power features and cloth interior, but has a small 5.0-inch touchscreen. Skip the SEL and go directly to the Limited; for about $20,000 it has automatic emergency braking, heated front seats, and a 7.0-inch touchscreen with Apple CarPlay and Android Auto.

Where is the 2022 Hyundai Accent made?