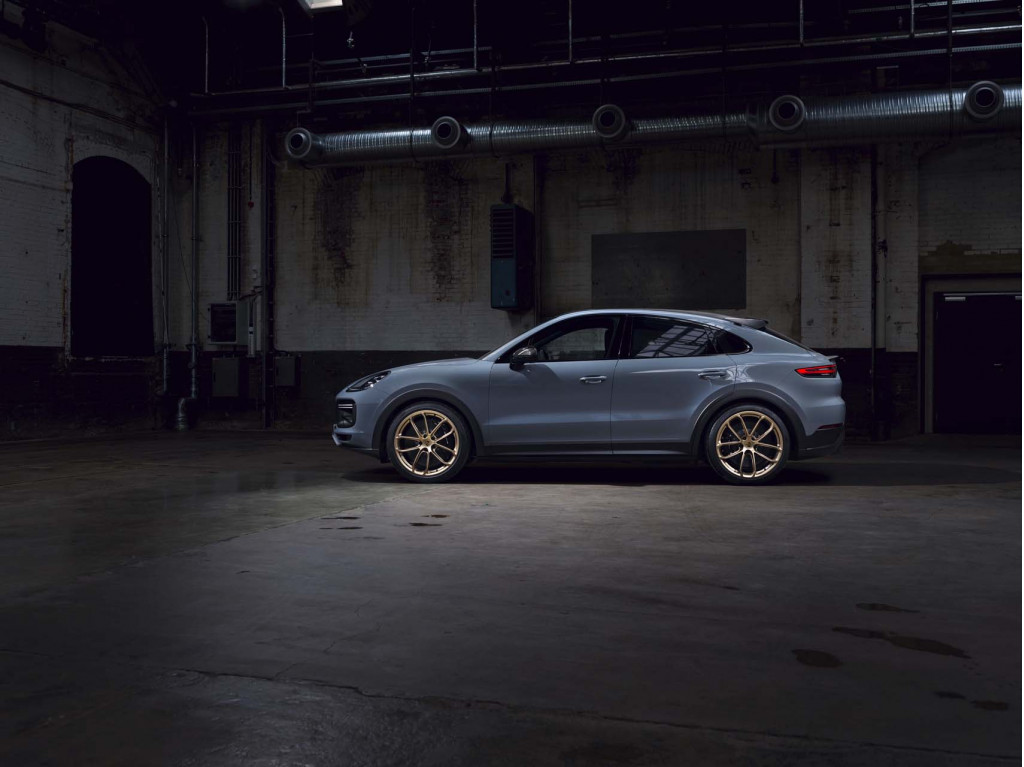 Remember the mystery Porsche Cayenne Coupe that earlier this month set a record 7:38.9 lap time at the Nürburgring?

Well, Porsche late on Tuesday revealed it as the 2022 Cayenne Turbo GT. No, we didn’t forget the word “coupe” in the name, even though the new Porsche is a member of the Cayenne Coupe family. We’re just happy Porsche didn’t call it a GT5, as had been rumored at one point.

The new member is positioned between the Cayenne Turbo Coupe and Cayenne Turbo S E-Hybrid Coupe, and can best be described as the most track-worthy Cayenne. Yes, there’s more power on tap but the key mods are in the chassis department. 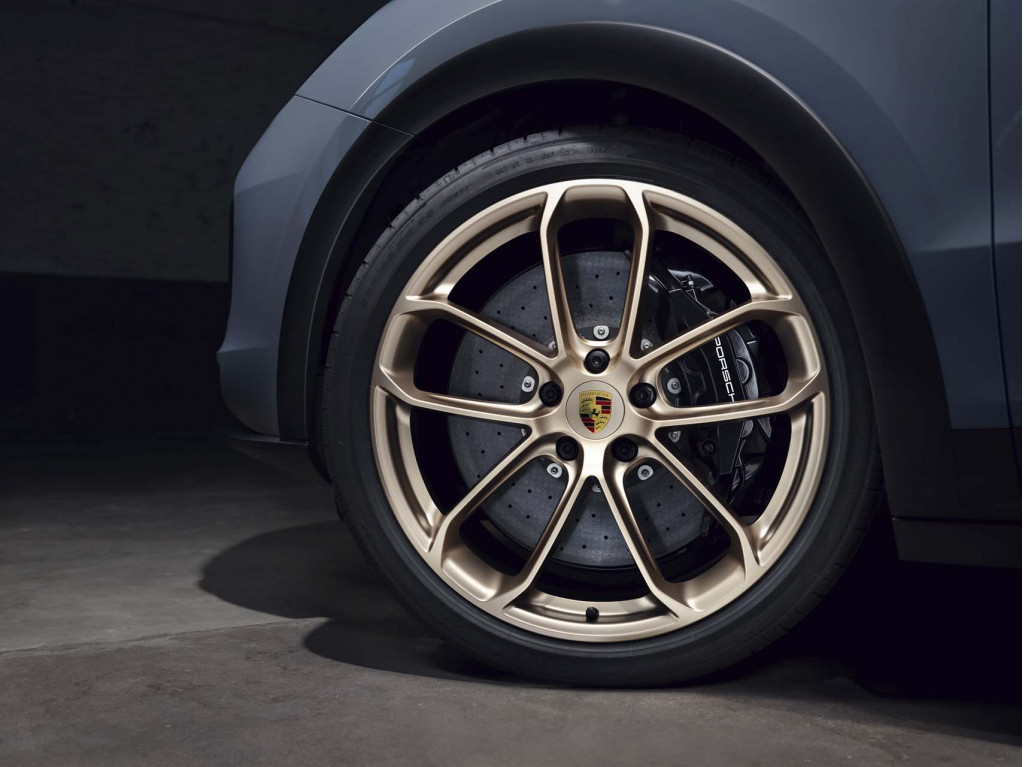 Multiple chassis mods have been made to the vehicle, including a 17-millimeter lower ride height compared to the Cayenne Turbo Coupe, up to 15% stiffer air suspension, and unique tuning of the dampers and steering. A new performance-oriented setup for the PDCC anti-roll system also results in reduced body roll and more precise turn-in when cornering, according to Porsche.

The front wheels are 1.0 inch wider than on the Cayenne Turbo Coupe, with negative camber increased by 0.45 degrees to enable a larger contact area for the tires and as a result more grip. The tires are a set of Pirelli P Zero Corsas designed specifically for this model and its 22-inch wheels, while carbon-ceramic rotors are fitted as standard to bring the beast to a standstill.

After recently taking a prototype for a spin at Germany’s Hockenheimring, rally legend and Porsche brand ambassador Walter Röhrl said the vehicle is so stable and agile through the corners that it feels like “you are sitting in a compact sports car rather than in a large SUV.”

Power comes from Porsche’s familiar 4.0-liter twin-turbocharged V-8, tuned here to deliver 631 hp and 626 lb-ft of torque. In comparison, the Cayenne Turbo Coupe comes with 541 hp while the Cayenne Turbo S E-Hybrid Coupe comes with 670 hp. Porsche estimates a 0-60 mph time of 3.1 seconds, a quarter-mile time of 11.6 seconds, and a top speed of 186 mph. All of them are insane for a crossover of this size.

Unique to the engine in the Cayenne Turbo GT are the crankshaft, pistons, connecting rods, timing chain and torsional dampers. The 8-speed automatic transmission has been modified to offer quicker shift times, while a water cooling system for the drivetrain’s transfer case has also been added to keep things cool during high-speed driving. A titanium exhaust system with central mounting for the tips is also standard and helps save around 40 pounds on its own. 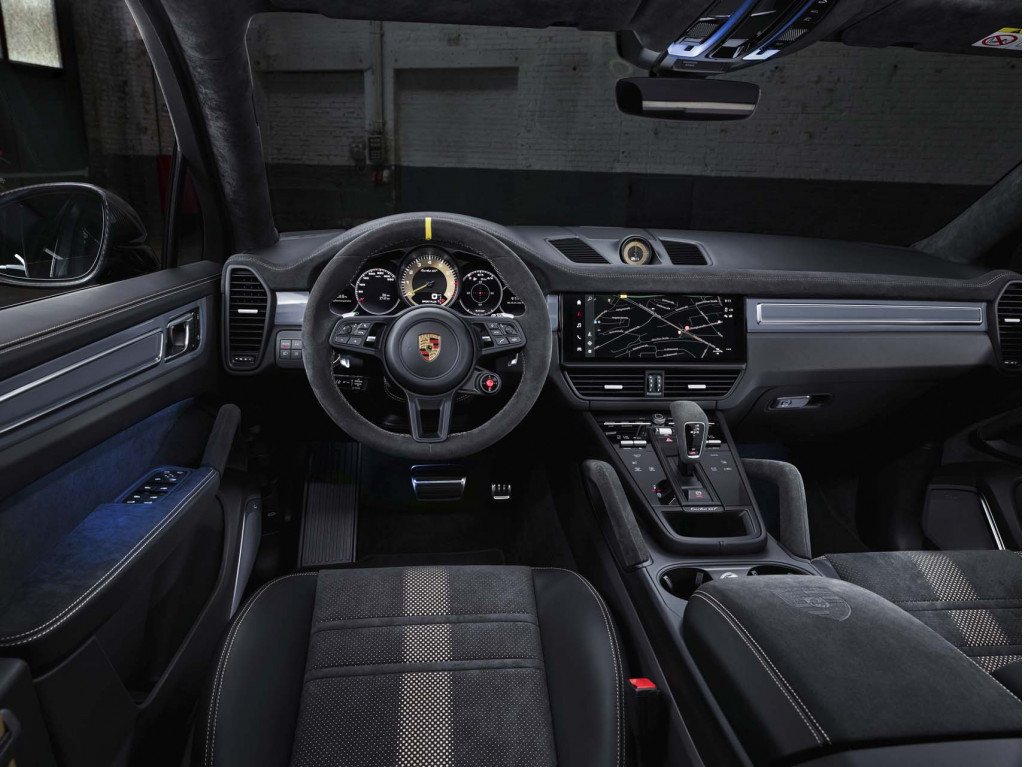 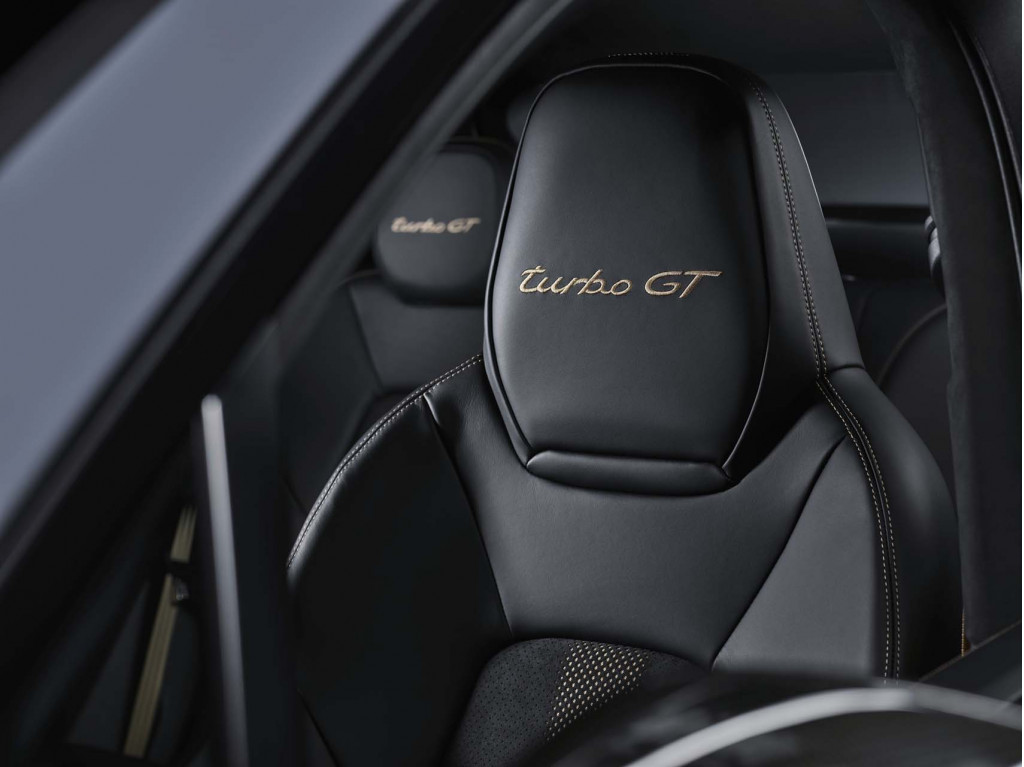 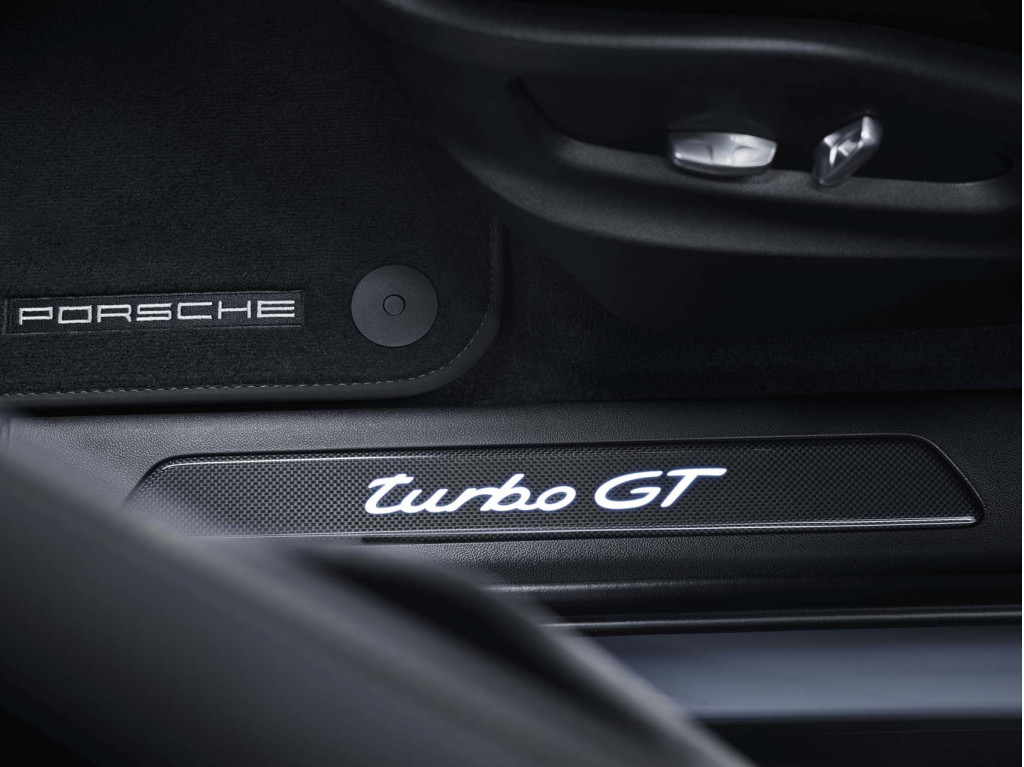 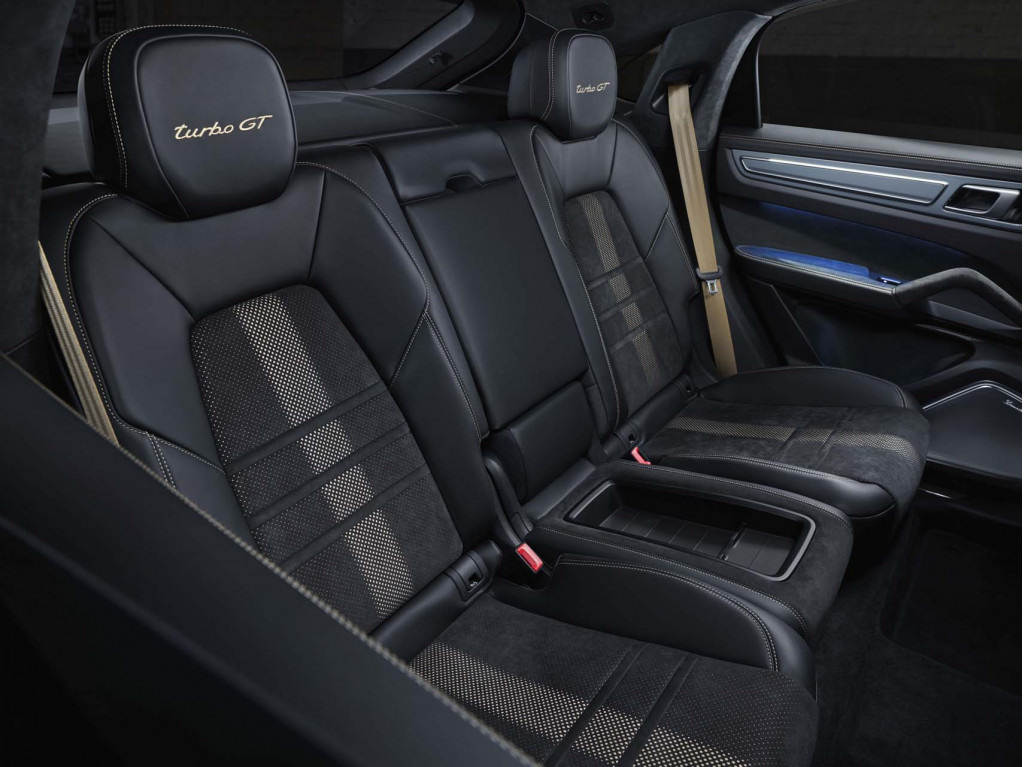 Inside, there are model-specific sport seats with perforated Alcantara trim, contrast stitching, and a “Turbo GT” inscription on the headrests. Porsche has also added its next-generation infotainment system which the automaker says has a new user interface and menu flow that improves functionality. The system is also compatible with both Apple CarPlay and Android Auto. Expect it to filter across to other Cayenne variants as part of next year’s mid-cycle update for the crossover.

The Cayenne Turbo GT can be ordered now and is due at dealerships in early 2022. It’s priced to start at $182,150, including destination.

What kind of car is the 2022 Buick Envision? What does it compare to?

The Envision is a five-seat crossover SUV with premium looks and a premium price. It’s engaging to drive, spacious and supportive for four adults or more, and has good infotainment with either its smaller or bigger screen. It competes with the Volvo XC60, Lincoln Corsair, and Lexus NX.

Very little, other than some new stitching and a new paint color. The Envision retains its toned, sleek body that reeks of Pilates and Peloton, and couples it with a sweeping and elegant cabin covered in a high grade of trim. It’s especially soothing in light-beige leather, with the expansive upgrade of a 10.2-inch touchscreen.

With a 228-hp turbo-4 and a 9-speed automatic, the Envision overcomes a stout curb weight with a strong surge of power from low engine speeds. The powertrain’s present, but not noisy. The suspension copes with most surfaces with aplomb, though we’d recommend the adaptive dampers to soak up the impacts generated by the available 20-inch wheels.

Five passengers will be a snug fit in the Envision but four large adults fit well. Its front seats can be upgraded from cloth and synthetic leather to soft leather that’s heated and cooled—and the rear bench seat can be heated in outboard positions, too. Fold down the rear seatback and the Envision can carry up to 52.7 cubic feet of stuff, easily loaded through the power tailgate that’s standard on Essence and Avenir trims.

How much does the 2021 Buick Envision cost?

The base Envision costs less than $35,000, and has an 8.0-inch touchscreen with wireless Android Auto and Apple CarPlay, 18-inch wheels, and LED headlights. We’d pick an Essence with front-wheel drive, and keep the price below $40,000; the most expensive Envision Avenir with all-wheel drive, adaptive cruise control, and a panoramic sunroof approaches $50,000.

Where is the 2021 Buick Envision made?

BEIJING — WeRide, a China-based autonomous driving startup, said on Wednesday that it would deepen development with the Renault-Nissan-Mitsubishi alliance on autonomous driving technology for the China market as it raised $310 million.

WeRide, led by founder Tony Han, said Alliance Ventures, the strategic venture capital arm of Renault-Nissan-Mitsubishi, has become the startup’s “lead strategic investor.” WeRide is pursuing what is known in the auto industry as a Level 4 autonomous standard, in which the vehicle can handle all aspects of driving in most circumstances with no human intervention.

WeRide, which is testing vehicles in California, is headquartered in China’s southern city of Guangzhou.

Investors for the $310 million funding round include Renault-Nissan-Mitsubishi and China Structural Reform Fund, WeRide said in a statement. The company didn’t specify how much each company invested in the funding round.

Nissan Motor co. COO Ashwani Gupta said: “As China stands at the forefront of helping define the future of mobility, we are delighted to partner with WeRide to bring even more innovative technologies and services to enrich people’s lives in China.”

Automakers and technology firms are investing billions of dollars in autonomous driving, aiming to take an early lead in what many consider the future of mobility.

In Guangzhou, where several COVID-19 cases were reported in recent weeks, WeRide and several other autonomous driving companies, including Toyota-backed Pony.ai, are delivering essential goods to residents in locked-down communities using self-driving vehicles.

My most excellent source—Deep Burble—recently told me the sad tale of the stillborn sixth-generation Camaro Z/28 that almost was, but never will be. I just had to say something. Yes, friends, Chevrolet was all set to build a follow-up to the absolutely brilliant, Best Driver’s Car winning fifth-gen Camaro Z/28. Now it ain’t. Feeling blue? You haven’t even heard the details.

MotorTrend lifers Scott Evans, Angus Mackenzie, and I have long talked about a so-called “Engine Hall of Fame.” My first ballot all-timer has always been the mighty LS7 7.0-liter V-8 of General Motors fame. First seen in the sixth-gen Corvette Z06, the 505-hp humdinger eventually trickled its way down to the Camaro Z/28. The results were staggering. Quoting me: “But it’s not just a name-brand collection of parts, and the Z/28 is no tuner. It stands as one of absolutely the best track-focused cars in the world.” Guess what? The new one would have been even better.

Why? The naturally aspirated, flat-plane crank, 5.5-liter V-8 from the upcoming Corvette Z06 would have provided power (likely more than 600 horses, too) to the new Z/28. Let that sink in. Now, you ready to get really upset? Due to packaging reasons, there’s just no way to build a C8 with a manual transmission. The car is mid-engine, and as such, the transaxle is behind the engine, which means any shift linkage would have to pass through the engine. On a Camaro, the transmission would sit between the engine and the driven wheels, making a manual transmission not just possible but totally probable. Amazing, no? Oh yeah, not happening.

Why not? “Yeah, it’s so sad,” Deep Burble moaned. “They messed up the sixth-gen [Camaro’s] styling.” Yes, friends, Chevy made the current Camaro so unattractive that it led to the premature death of what would have no doubt gone down in the history books as the greatest Camaro of all time. “[Chevy is] like, ‘We can’t believe it’s not selling. It’s so much better than the competition. ‘” This is true. Not only was the sixth-gen Camaro our 2016 Car of the Year, but it’s beaten its chief rival, the Ford Mustang, in every comparison test I can think of. “[Chevy] fails to realize that most people buy styling over performance.” Shame, shame.

DETROIT — The Detroit automakers and the UAW said on Tuesday fully vaccinated workers at their U.S. factories will not have to wear masks on the job beginning on July 12.

General Motors, Ford Motor Co., Stellantis and the union that represents their U.S. manufacturing workers said in a joint statement that those who have not been vaccinated will continue to wear masks at work.

“The task force will continue to monitor data carefully and make any adjustments necessary to protect the health and safety of employees,” the joint statement said.

“While the UAW and the companies continue following the protocols that have kept our workplaces safe, we know that one of the best ways to fight this virus is by getting vaccinated. The Task Force continues to encourage everyone to roll up their sleeves and get vaccinated against COVID-19 so that we can protect our sisters and brothers and their families.”

Other automakers operating in the U.S. have already begun lifting pandemic mask mandates as the number of new COVID-19 cases recedes.