Data giant S&P Global Inc has agreed to buy IHS Markit — a major player in the automotive data segment — in a deal worth $44 billion that will be 2020’s biggest merger, creating a heavyweight in the increasingly competitive market in financial information.

The mega deal, which includes $4.8 billion of debt, is a sign that deal-making activity is accelerating as breakthroughs in developing COVID-19 vaccines improve the economic outlook.

Deals touched a record high in the September quarter, with more than $1 trillion worth of transactions, mostly focused on coronavirus-resilient sectors such as technology and healthcare, according to Refinitiv data.

Under the terms of the deal, each share of IHS Markit will be exchanged for a fixed ratio of 0.2838 shares of S&P Global stock, the two companies said in a statement.

S&P Global is renowned for providing debt ratings to countries and companies, as well as data on capital and commodity markets worldwide. It became a standalone business in 2011 when its then parent McGraw-Hill separated S&P from its education business.

IHS Markit was formed in 2016 when IHS, whose businesses range from data on automotive and technology industries to publishing Jane’s Defence Weekly, bought Markit Ltd for around $6 billion.

Markit was founded by former credit trader Lance Uggla. IHS has a market value of around $36.88 billion based on the stock’s last close on Friday, a Reuters calculation showed, with its share price up around 22 percent so far this year.

The transaction is likely to face close scrutiny from competition watchdogs as the market for financial information becomes increasingly concentrated.

The Wall Street Journal reported news of the deal earlier on Monday.

Tesla China continues to blitz towards the impending ramp of the Model Y in Gigafactory Shanghai, with the EV maker securing the necessary permissions to start selling the all-electric crossover in the country. The approval was published by China’s Ministry of Industry and Information Technology on its website on Monday.

Tesla applied for the Made-in-China Model Y’s sales permission earlier this month. The application comes amidst sightings of trial production Model Y around the country and within the Gigafactory Shanghai complex. With these developments in mind, it appears that Tesla China is poised to start delivering the Model Y to customers in early 2021.

As observed by Tesla owner-investor @Ray4Tesla, the Made-in-China Model Y has also been included in the 12th batch of New Energy Vehicles (NEVs) that are recommended by the country. The all-electric crossover is also poised to be exempted from purchase taxes, which stand at about 10%.

Assuming that Tesla is also able to secure a production permit for the Made-in-China Model Y, the electric car maker could very well start a serious ramp of the vehicle’s production soon.

With the Model Y entering the Chinese EV market, the reach of the electric car maker in the country would likely see a boost. The Model Y, after all, is a crossover, which competes in a segment that is far more popular and lucrative than the sedan market, which the domestically-produced Model 3 competes in.

Should You Consider Getting The 2021 Mercedes-Benz E-Class All-Terrain?


In March, Mercedes-Benz unveiled the 2021 E-Class All-Terrain Wagon complete with a handful of updates and confirmed that it is coming to the United States.

The high-riding version of the E-Class Wagon follows the same recipe of rivals like the Audi A6 Allroad and Volvo V90 Cross Country with features including an increased ride height and black body cladding. The E-Class All-Terrain also features a bespoke front grille and a distinctive skid plate. It all looks rather nice and the car was recently put through its paces by Autogefühl.

Like the regular E-Class, the interior of the 2021 All-Terrain is extremely nice and filled with loads of impressive technologies. A good portion of the interior review focuses on the MBUX infotainment system that houses features like the ambient lighting and massage seats.

The review then shifts to the Autobahn. Thee car is put through its paces at cruising speeds of 124 mph (200 km/h), with the presenter noting that it remains stable and is very quiet. 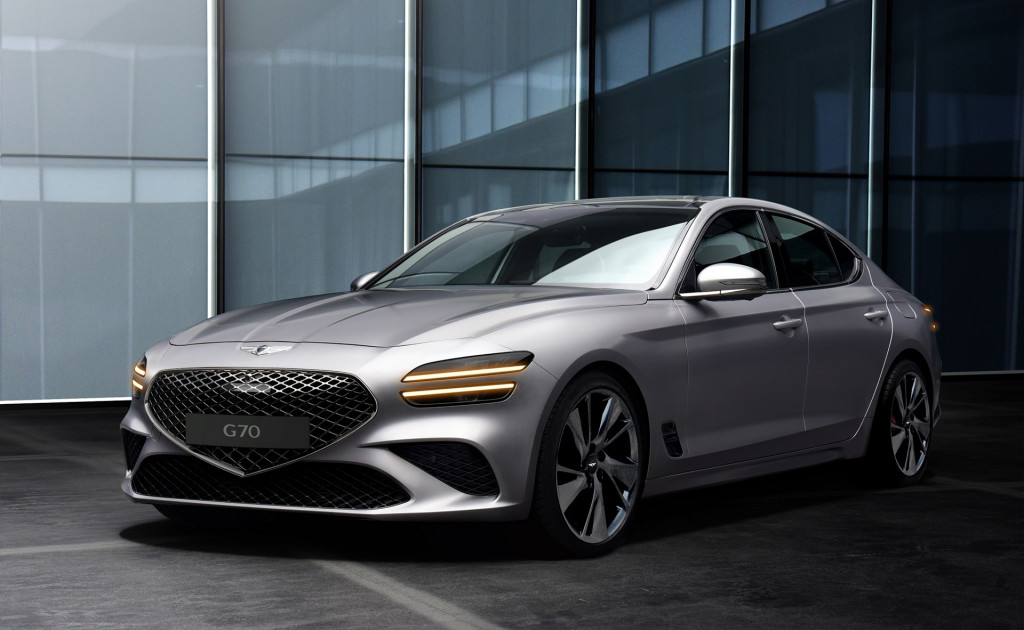 2022 Genesis G70 wagon spy shots: Longroof coming but probably not to US

Genesis will add a wagon body style to its G70, as evidenced by the recent sighting of this prototype in Europe.

Genesis hasn’t announced plans for a wagon but we’ll likely see it introduced next year to coincide with the market launch of an updated G70 sedan.

The G70 sedan only arrived for 2019 but Genesis has updated the styling so it matches the rest of the cars in the automaker’s lineup, namely the new G80 and GV80. The updated G70 sedan is expected on sale next year as a 2022 model.

Don’t expect to see the wagon reach the United States. It’s designed to target vehicles like the Audi A4 Avant, BMW 3-Series Sports Wagon, and Mercedes-Benz C-Class Wagon, none of which are sold here. The arrival is meant to coincide with Genesis’ expansion into Europe where wagons are popular.

Genesis is yet to reveal details on its updated G70. The current powertrain lineup will likely carry over to the updated range, meaning the choice of a 2.0-liter turbocharged inline-4 or a 3.3-liter twin-turbocharged V-6. A 2.2-liter turbodiesel inline-4 is also offered in some markets. Sadly, the manual transmission is being dropped. It’s not a huge surprise as less than 1% of G70 buyers tick this option.

The new model introductions at Genesis won’t slow anytime soon. Two SUVs are in the works, one of which is the GV70 small SUV arriving next year. Also arriving next year will be a dedicated EV and an electric version of the G80.

The 2021 Nissan Versa is a new car, and not much more–and that’s not damning it with faint praise. Few cars offer its safety and infotainment features at its price, and of those that do, it’s among the best.

What kind of car is the 2021 Nissan Versa? What does it compare to?

It’s a four-door sedan, and sized like a Hyundai Accent or Kia Rio.

It’s carried over, since it was new in the 2020 model year. That means its V-shaped grille, curved roofline, and pert dimensions are unchanged. The Versa’s a handsome little car, one with a well-sorted interior that avoids the curse of thrifty materials.

Performance comes from a 122-horsepower inline-4, and it’s busy just keeping up with demand in the Versa. Power goes to the front wheels through a very rare 5-speed manual—not recommended here because of the features that model lacks—or through a continuously variable transmission (CVT), which delivers better fuel economy anyway. The ride’s OK, and so is the steering, but no one buys a Versa with Speed Racer dreams anyway.

The Versa’s well-suited to city commuting for a single driver or a plus-one situation; however that works out is between you and Tinder. What it’s not so good at is putting big people in back. Head and leg room are lacking. It’s better in trunk space, with a fanny pack bigger than the one on some luxury sedans.

Starting at $15,855, every Versa gets automatic emergency braking, a 7.0-inch touchscreen, blind-spot monitors, and a powertrain that returns at least 30 mpg combined. The Versa SV adds in Apple CarPlay and Android Auto compatibility and 16-inch wheels and a CVT; it’s our pick. The $19,265 Versa SR adds a few sporty touches, but doesn’t seem to fit the economy-car equation as well.