When Volkswagen unveiled its Bulli concept vehicle last March at the 2011 Geneva Motor Show, the response from the press and the public was fairly unanimous: “Build it!” Now, there are rumors that VW is preparing to do just that, and it could hit the U.S. by 2014.

The Bulli was a hit for at least two reasons. For starters, it’s a squared-off multi-purpose vehicle, like countless others littering showrooms these days (e.g. the Kia Soul, Nissan Cube, and Scion xB). However, the Bulli feels a bit bigger and more grown up than some of those MPVs — possibly a competitor with rides like the Ford Flex and a definite option for the young family looking for a hip alternative to the minivan.

But what really turned heads was the Bulli’s styling: sleek and retro with a big greenhouse, reminiscent of the VW buses many folks remember from childhood. (In fact, the Bulli was a riff on the Microbus concept that VW debuted in 2001.) It was also an EV with a range of 185 miles and a recharge time of just one hour.

We can’t vouch for the rumors about the Bulli’s move to the production line, but group design chief Walter de’Silva has some enthusiasm for the idea: “We don’t have a space for another conventional MPV, but this one would be desirable on a different level, combining practicality with the heritage appeal.”

And he’s right: the Bulli would look great sitting alongside VW’s other heavy-hitting heritage model, the new Beetle. Rumors point to production of the Bulli at VW’s facility in Puebla, Mexico — the same plant that produces the Beetle. If that’s true, we could see the MPV in showrooms as part of VW’s 2014 model-year lineup.

But don’t expect the production Bulli to be an EV — at least not yet. Rumors indicate that the road-ready version will have a conventional combustion engine. Either way, we’re looking forward to it.

Even though the visually oriented blogging site Tumblr seems poised to cross over to the mainstream, it’s still viewed as a place for trendsetters in fashion and design. So really, it’s no wonder that Volvo is using Tumblr to tease one of its newest fashion-forward rides, the Concept You.

Last week, we pointed to a video tease of the Concept You. By all accounts — even Volvo’s — the Concept You will be a follow-up to the Concept Universe that debuted in April at the 2011 Shanghai Auto Show. That vehicle was essentially a preview of the new S80 sedan, and one that pointed to Volvo’s recent decision to develop vehicles sporting engines no larger than four cylinders, with particular attention paid to hybrid and electric technologies.

The name “Concept You” refers to Volvo’s new brand strategy, “Designed Around You”. That’s a fairly empty phrase as branding goes, but it does imply a design language that prioritizes human needs above speed, performance, tech flash, and other potential focuses.

Other than that, we know very little about the Concept You — whether it will sport a conventional, hybrid, or electric engine, whether it’s a coupe, a sedan, or crossover, etc. If we had to guess, we’d imagine something on the small side, perhaps a step down from the Concept Universe, but that’s all speculation in advance of the concept’s debut tomorrow at the 2011 Frankfurt Auto Show.

While we’re waiting for that reveal, feel free to develop your own guesses while skimming through Volvo’s Tumblr page. The posts aren’t all centered around new models — in fact, the most recent highlights an older Volvo that never made it into production — but several have been tagged “Concept You”. Stay tuned for details. 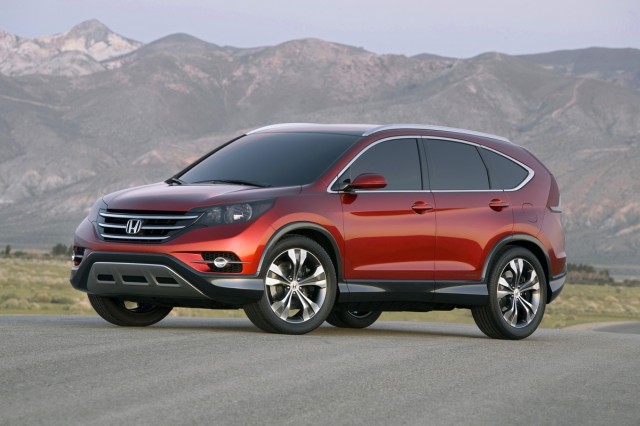 World debuts for new concept and production models typically happen at premier auto shows, like the North American International Auto Show, the Tokyo Motor Show or even the IAA (more commonly known as the Frankfurt Auto Show). The Orange County International Auto Show, held annually in Anaheim, California, isn’t where most automakers would choose to debut a revision to one of their most popular models.

Honda isn’t like most automakers, so it chose the Orange County International Auto Show for the world debut of its 2012 Honda CR-V Concept. Not only is the current CR-V one of Honda’s best-selling models, it’s also the best-selling SUV in the United States, by calendar year, from 2007 through 2010.

That makes the success of the fourth-generation Honda CR-V critical to Honda’s sales in the United States, so Honda needed to walk a fine line between too many design changes and not enough changes. The styling of the concept would seem to indicate that Honda’s designers hit their mark.

The 2012 Honda CR-V Concept is more dramatically styled than CR-Vs of the past, yet still tasteful in its design. Character lines on the new CR-V are more deeply sculpted, and the front end is somewhat aggressive in appearance. Signature styling traits, like the faux front skid plat and vertical tail lights, remain, and the muscular rocker panels give the CR-V something of a sporty look.

Honda is quick to point out that this is still just a concept, albeit one that “strongly hints” at the styling of the upcoming production model, which will debut at the Los Angeles Auto Show in November. What other changes, compared to the current CRV, does Honda have in store? Expect a more fuel-efficient engine, a lower curb weight and a revised interior that Honda calls “accommodating and spacious.”

Look for the 2012 Honda CR-V to hit dealer showrooms by the end of the year.

Acura fans, we have good news: the automaker is bringing not one, not two, but three all-new vehicles to the 2012 Detroit Auto Show in January. Two of those rides will be concepts, and the third appears to be a working prototype of a 2013 model.

The prototype is of the 2013 RDX, Acura’s five-passenger SUV. This marks the second generation of the RDX, which is expected to roll into showrooms in late 2012. We don’t know much about this re-design, but rumor has it that the 2013 RDX will arrive with a V6 engine and a few new styling details, courtesy of its big brother, the Acura MDX (pictured above and below).

Of the two other vehicles, pay particular attention to the ILX concept. Acura describes it as a “styling study of an all-new luxury compact sedan”, which is expected to launch in spring of 2012. If you keep up with our sister site, Motor Authority, you know that the ILX will be an entry-level luxury vehicle and that it’s meant to replace the Acura TSX. The ILX will be based on the Civic platform, and the final version is expected to ring in under $30,000. We’re not sure how closely the ILX concept appearing in Detroit will mirror the final product, but we know that Acura is betting big on the new model: it’s hoping to sell 33% more of them than the outgoing TSX.

The ILX should arrive with three powertrain options: a 2.0-liter four-cylinder automatic, a 2.4-liter four-cylinder manual, and a 1.5-liter hybrid. All of those will be manufactured here in the U.S., marking the first time that Honda will build a hybrid at an American facility.

Last but not least, there’s the concept version of the Acura NSX supercar, which is slated for rebirth in the near future. It’s likely to arrive with Honda’s new hybrid-based SH-AWD (short for super-handling all-wheel drive), which recently debuted at the 2011 Toyota Motor Show.

We’ll cover all three of those models as they roll out on January 9. Stay tuned to The Car Connection for those and other stories coming from the 2012 Detroit Auto Show.

Honda has given the world a preview of the next-generation Accord midsize sedan with the 2013 Accord Coupe Concept, revealed earlier this week at the Detroit Auto Show. This thinly veiled concept car is nearly production ready.

Take away the concept car wheels, though a similar design may make production, and put an interior in this concept and you’ll have the new 2013 Accord. Honda may end up toning own the aggressive front and rear ends a bit with smaller air inlets in the front and possibly the removal of the integrated exhaust tips in the rear. Typically we would say the LED lights up front wouldn’t make it to production, but with the trend now being LED daytime running lights, we can’t be sure.

Honda is bringing back the hybrid model for this next-generation Accord, and is adding a plug-in hybrid to the model mix. The plug-in setup will consist of a four-cylinder engine and a 6-kilowatt-hour battery connected to a 120-kilowatt electric motor. Electric only range will be only 10 to 15 miles with a top speed of 62 mph. On a standard 110-volt plug, Honda says it will only take four hours to fully recharge the battery pack, and only 90 minutes when using a 240-volt charger.

Also available will be the tried and true 2.4-liter four-cylinder and 3.5-liter V-6. The four-cylinder will be paired with a continuously variable transmission while the V-6 will be connected to a six-speed manual or automatic transmission.

For more information on the 2013 Honda Accord Coupe Concept check out our full preview here, and make sure take a look at all our Detroit Auto Show news coverage right here.

We’ve spilled a lot of virtual ink discussing Generation Y (aka Millennials) and their love/hate relationship with cars. Among the findings in recent years:

Understandably, these doom-and-gloom predictions have automakers worried . Some are planning for a future filled with alternative mobility options. Others insist that, no, the kids are all right, just give them time and they’ll come around. The latter have occasionally attempted to create cars just for Millennials, with mixed results.

And so, the younguns have taken matters into their own hands. According to Auto News, a team of grad-student engineers at Clemson University recently pulled the wraps off a long-awaited new car, built as a concept for Mazda.

Dubbed “Deep Orange 3”, the vehicle looks like many other concepts at auto shows, right down to the itsy-bitsy, would-never-get-approved side-view mirrors and the lack of door handles. But there is something fairly unique about the car: it’s a six-seater.

Apparently, Millennial drivers want to carry around exactly six people — not five, like you could fit in a sedan, and not seven, which would require an SUV or minivan. They want seats for six. (Related prediction: triple-dating will be a thing in the future.)

To make that happen, they’ve designed a car that seats three folks up front and three in the back. (What that does for dating, we can’t say.) Rather than including a bench up front to accommodate a third person, the team dropped a bucket seat right in the middle of the row.

Inelegant? Maybe. Awkward? Probably so. But remember, people said the same thing about texting when it debuted, and look at that awesome technology now, right Mr. Weiner?

You can see some stills of the Deep Orange 3 in the short clip embedded above. For additional details, you’ll have to click to this video, which for reasons we can’t explain, isn’t embeddable.

We fully applaud the Clemson team’s work, even if it’s not yet perfect. How about you? What constructive criticism would you offer? Is the Deep Orange 3 on the mark, or is it another case of The Homer? Share your thoughts in the comments below.