Driven: 2021 Toyota GR Yaris Rallye Is The One You Should Go For 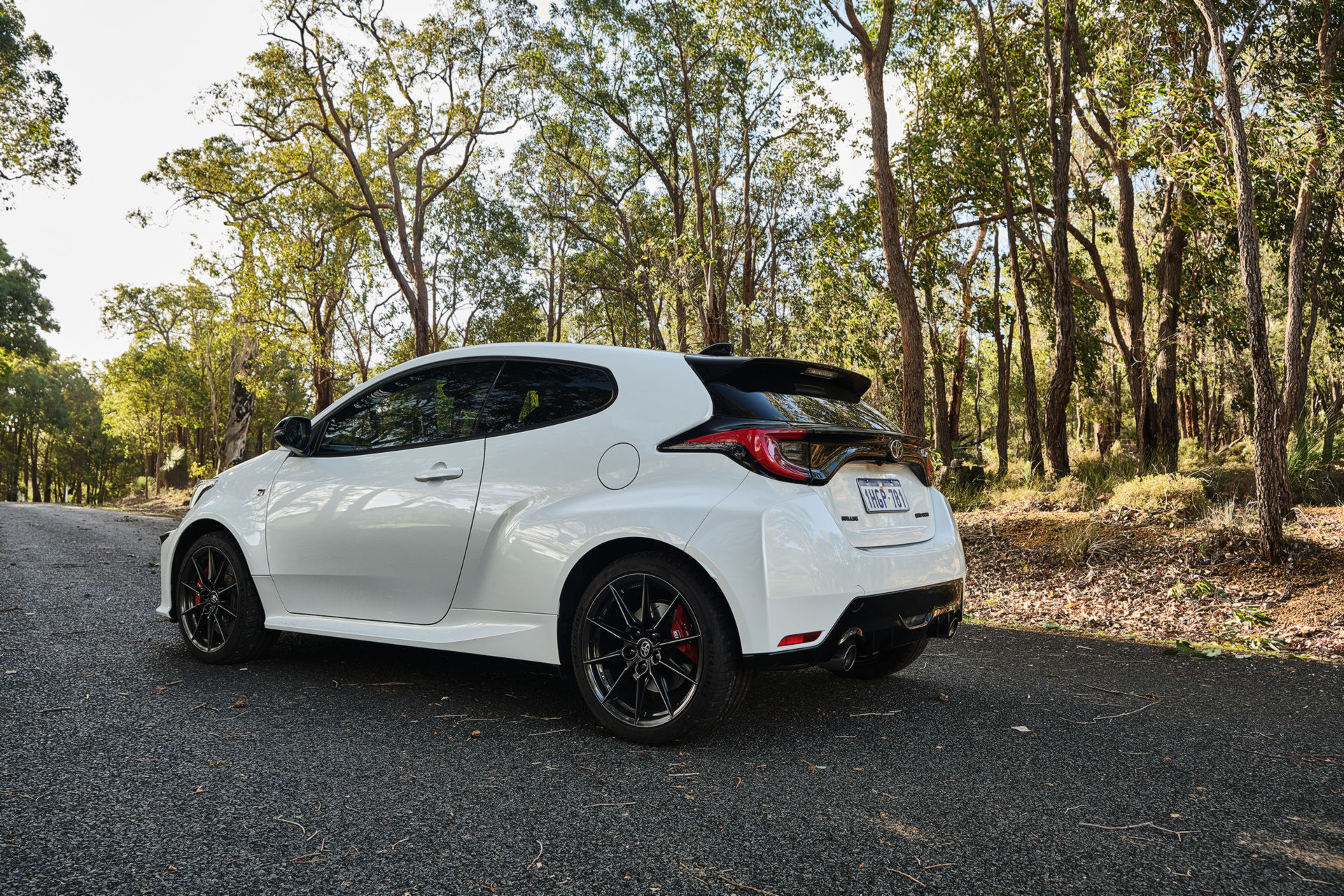 Sometimes, we’ll test a car that gets so under our skin that we think about it for months, if not years, after handing back the keys. The Toyota GR Yaris, perhaps surprisingly, was not one of those cars.

We had the opportunity to test out the entry-level GR Yaris in Australia back in February and after reading and watching so many reviews proclaiming it to be a great performance car, had very, very high expectations. However, it wasn’t all we had hoped for. That is, until now.

You see, in Australia, Toyota made the decision to initially launch the GR Yaris in standard form and then a few months later, unveiled the flagship Rallye variant. The Rallye is the equivalent of models equipped with the optional Circuit Pack in other markets and comes with front and rear Torsen limited-slip differentials, a track-tuned suspension, 18-inch forged BBS wheels, red brake calipers, and Michelin Pilot Sport 4S tires, components not found on the standard model.

These extra features transform the GR Yaris and combine to create one of the finest hot hatches launched in recent memory. 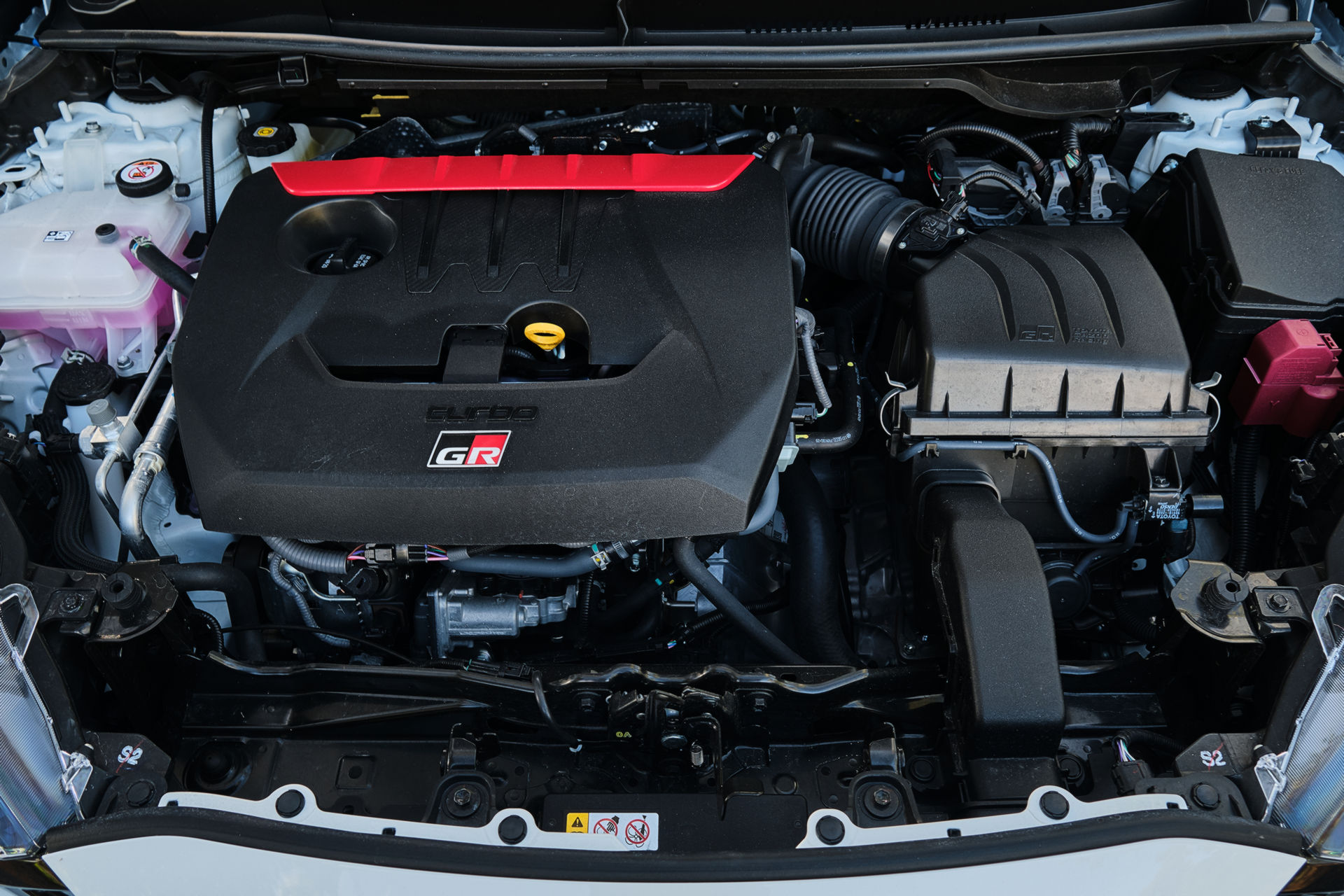 As we discovered earlier this year, Toyota’s punchy three-pot is a firecracker of an engine. Sure, it may have one less cylinder than most of its rivals but it has just as much power and a soundtrack that makes most four-cylinder turbo engines seem dull. With that being said, the exhaust sound is rather uninspired, especially compared to the likes of the Hyundai i30 N and Renault Megane R.S. Dropping the rear seats does help you hear the exhaust more clearly but it’s not the type of sound you’ll be thinking about in your dreams.

Driven: 2021 Toyota GR Yaris Is A Great Hot Hatch, But We Do Have Some Gripes

Mated to the 1.6-liter is a six-speed manual transmission. Hoping out of my 2011 Renault Clio RS 200 (review coming soon), I was immediately struck by just how light the clutch of the GR Yaris Rallye is. The shifter is also nicely placed and has a great weight to it. It also has a short throw and can be used to perform perfect heel-and-toe downshifts, helped by the positioning of the pedals. One thing I didn’t really notice when driving the GR Yaris earlier this year was just how narrow the footrest is for the driver. In fact, the only way to rest my left foot without it touching the clutch pedal was to push it hard up against the transmission tunnel. 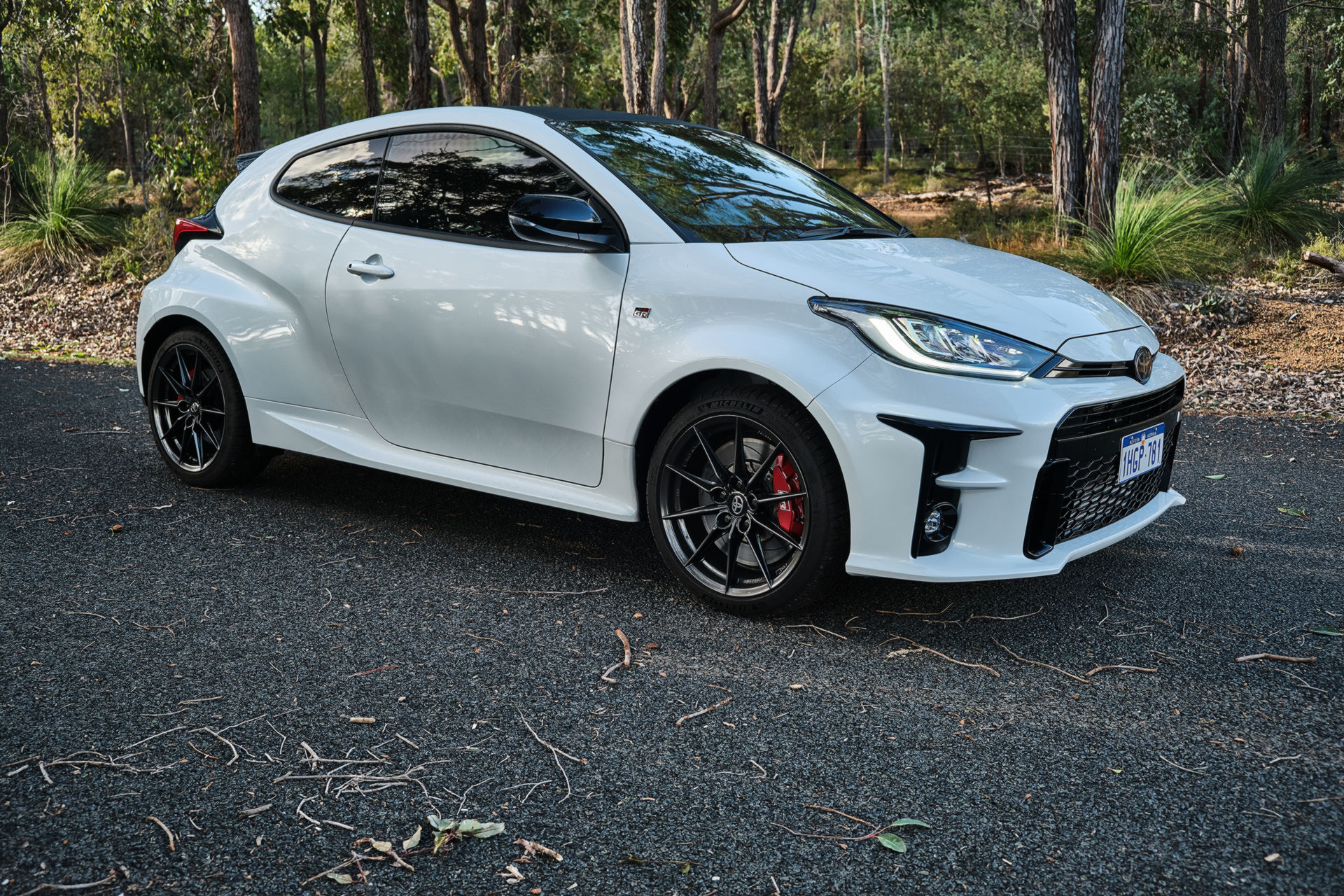 While living with the GR Yaris Rallye for a week, I was also reminded of just how poor the visibility is. For starters, the rear window is absolutely tiny and there are massive blind spots thanks to those huge C-pillars. The biggest challenge though is the visibility out of the windshield from the driver’s seat. Due to the positioning of the infotainment screen and the rear-view mirror, there’s only a few inches of space to look through. It’s not normally an issue but there were times when I was approaching an intersection or roundabout and couldn’t see cars from behind the mirror. This is exacerbated by the high seating position.

However, these issues fade into insignificance when you start to push the GR Yaris Rallye.

Toyota developed the car for the World Rally Championship (although it eventually decided to stick to the old model) and its motorsport-focused intention becomes apparent the moment you start to push it. The Dunlop SP Sport Maxx tires of the regular model we previously tested provide good levels of grip but they could only be described as ‘reasonable’ and nothing more. The Michelin Pilot Sport 4S tires of the GR Yaris Rallye are phenomenal.

This doesn’t come as a surprise; many car manufacturers fit their vehicles with the Michelin PS4S as they are among the finest high-performance summer tires in the industry. Slotted onto the Toyota, they stick to the pavement like glue and that’s true whether the roads are dry or wet. These tires are light-years ahead of the Dunlops and transform the car. 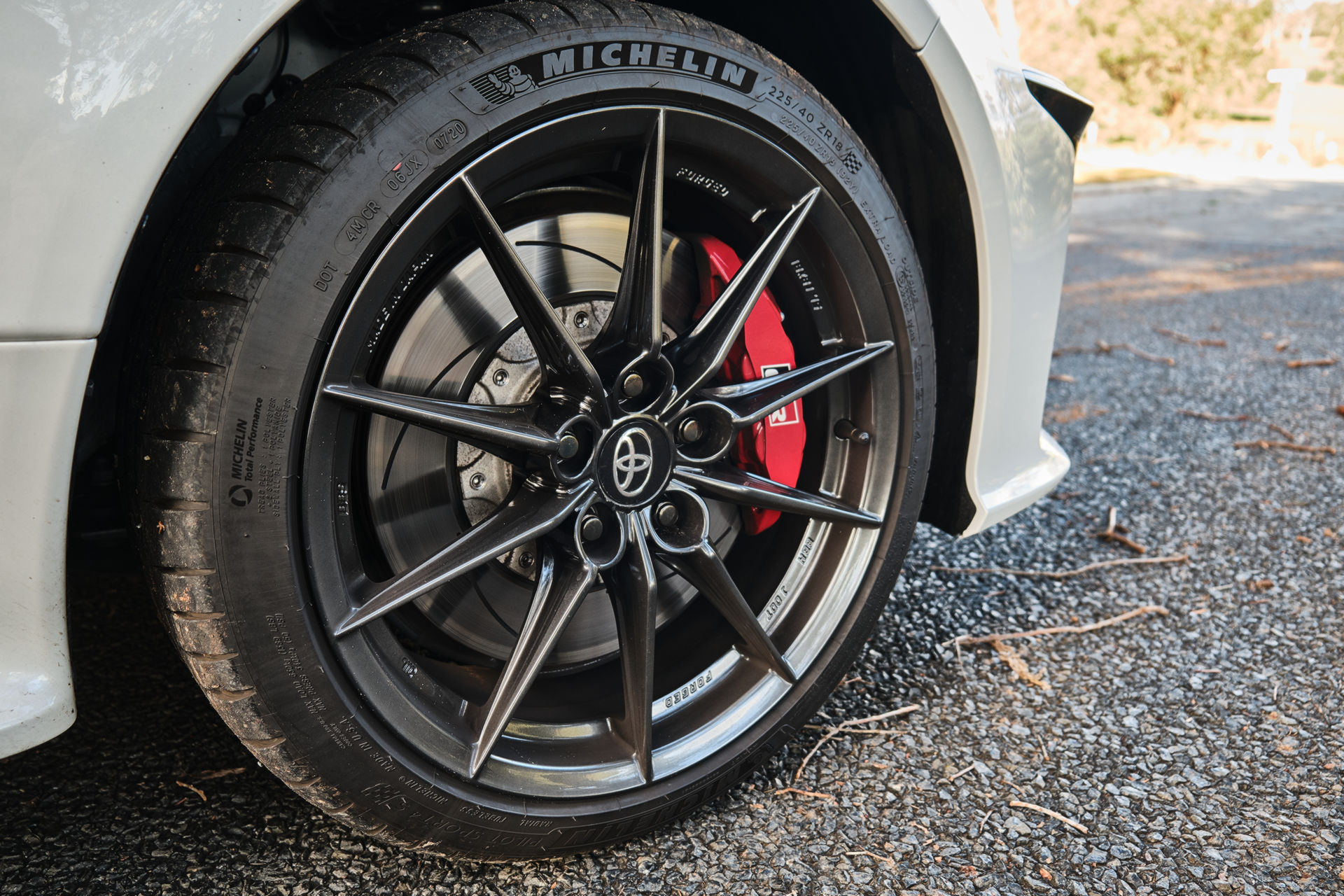 Then there’s the Torsen limited-slip differentials. While driving the regular GR Yaris, I found that the power and torque could easily overwhelm the tires during hard and sharp concerning despite the car’s complex all-wheel drive system. By comparison, the Rallye puts its power down much more effectively, allowing you to hit the throttle mid-corner without worrying about the car understeering. Instead, it simply grips harder and pulls you into the apex. The LSDs and new tires work in harmony to transform the handling experience. For owners of standard models, simply swapping the standard Dunlop tires for Michelins should result in drastic improvements in how the car handles.

Try as I might, I was unable to find the limits of the Rallye’s grip on the road. Doing so would require you to take corners at truly frightening speeds. The only time I got close was while pinning the throttle in the second half of a tight, 70 km/h (43 mph) second-gear corner, and gently pushing a few inches wide of an ideal line.

One of the other party pieces of the GR Yaris Rallye is the handbrake. If you’re feeling brave, you can pull on the handbrake and the car will spin 180-degrees on a dime. It genuinely is the best handbrake this side of a legitimate rally car and allows you to have some fun in the car that’s simply not possible in its rivals.

Like the standard model, the Rallye can be driven in Normal, Track, and Sport modes. Normal has a 60:40 front-rear power split while Track has a 50:50 split and Sport sends 30 per cent of power to the front wheels and 70 per cent to the rear. The differences between these modes are clear as day, with Sport being the pick of the bunch for me. Thanks to the rear-biased power split, it adds even more enjoyment to the driving experience, allowing you to feel the rear end rotate during cornering. 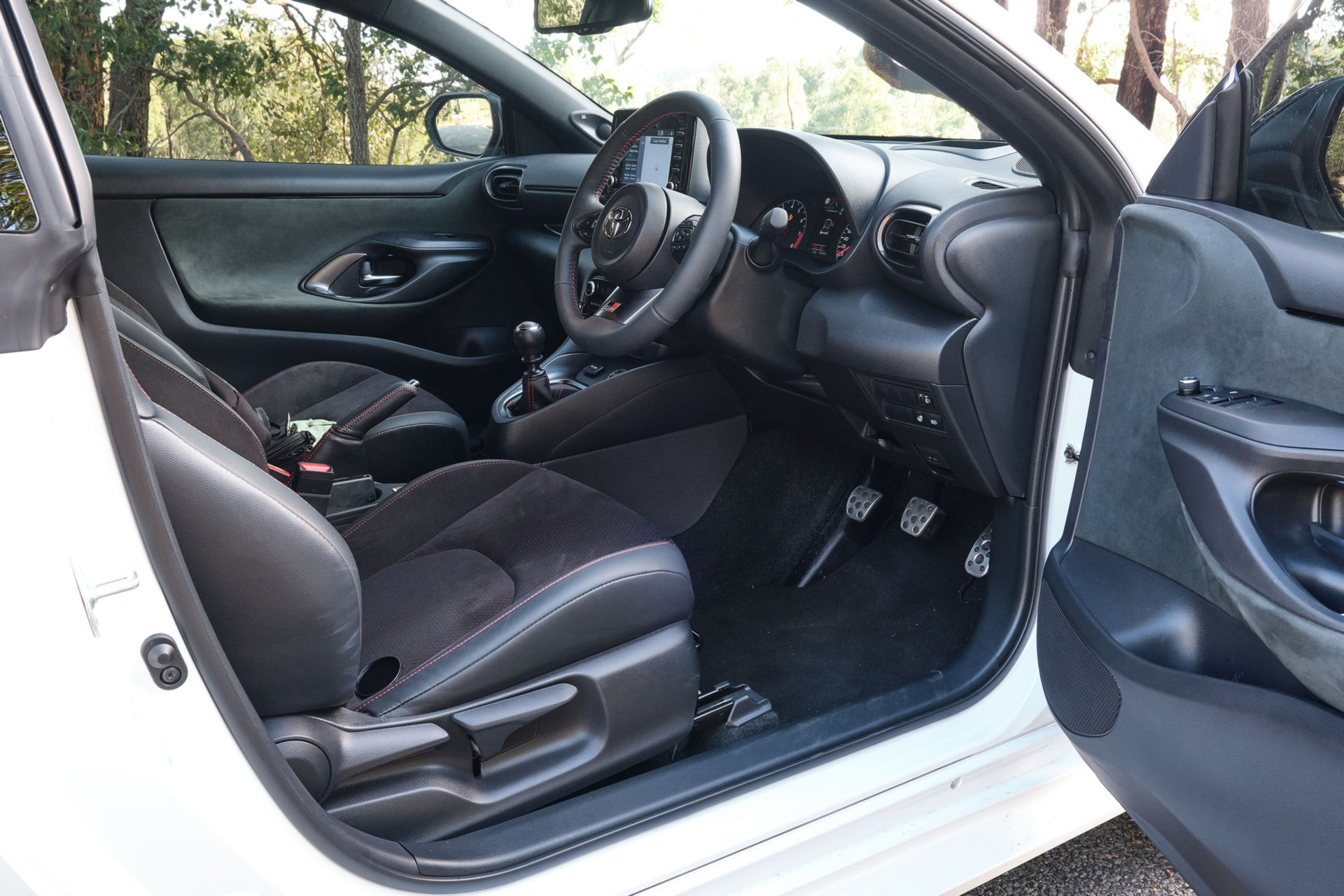 In terms of the car’s interior, it is differentiated from the standard model thanks to bright red stitching and a little Rallye badge near the cigarette lighter, denoting it as one of 250 Rallye models that are coming to Australia in 2021. With the exception of the aforementioned visibility and seating position, the ergonomics of the car are nice, as is the 7.0-inch infotainment system with Android Auto and Apple CarPlay. Luxury features including heated seats and a heated steering wheel are also welcome additions and make the GR Yaris Rallye a very suitable daily driver.

Heading into my week with this rally-bred hatch, I had very high expectations. The car exceeded all of them. There are few cars that will give you as many thrills as the GR Yaris Rallye for less than AU$100,000 (US$73,000). It is bound to be a future collectible but the one thing I still struggle to rationalize is the near-AU$60,000 (US$44,000) asking price, which puts it up there with the likes of the Honda Civic Type R and Renault Megane R.S. Trophy but with far less practicality.