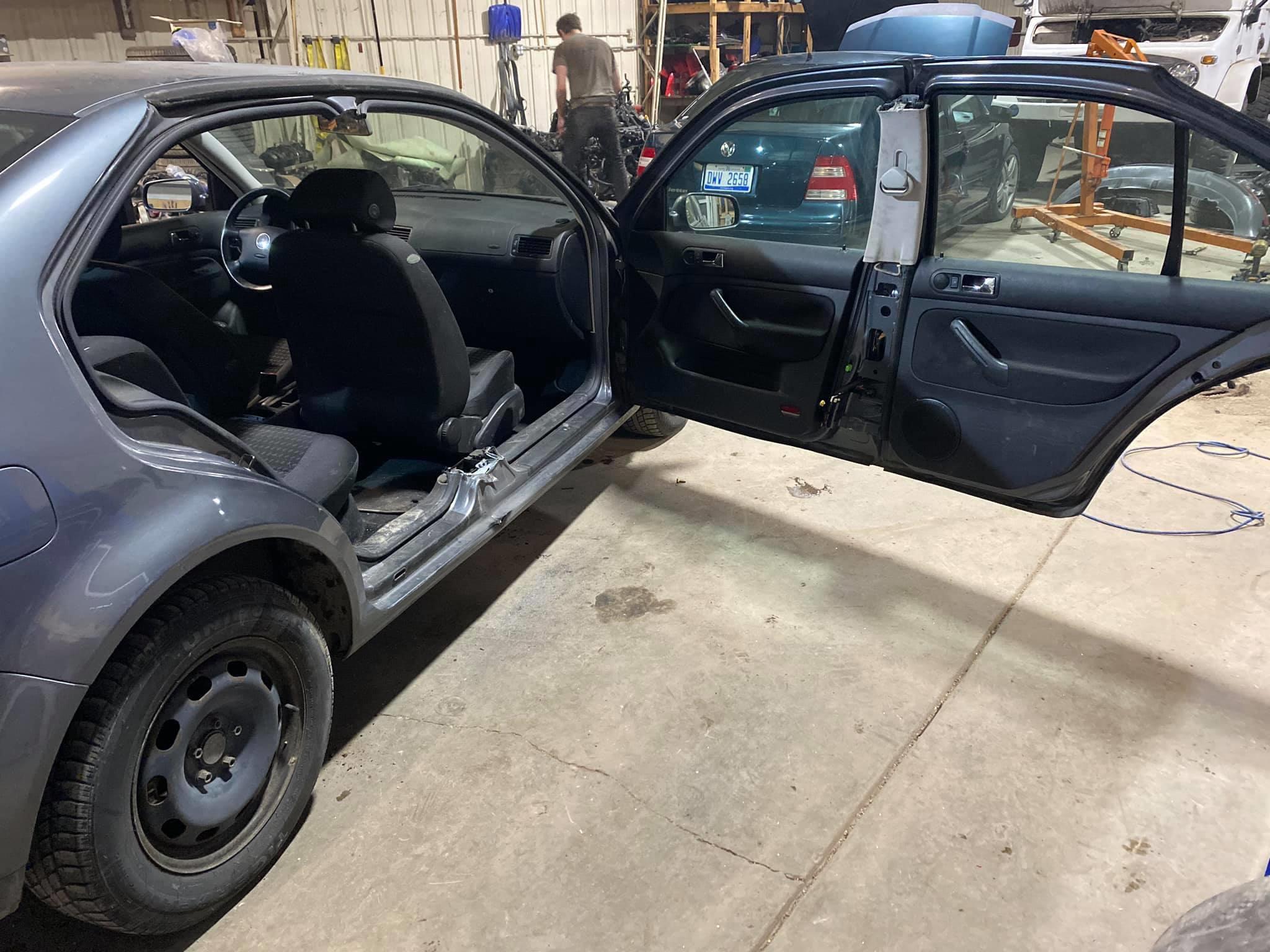 Now You Know Who Dinged Your Car; The VW Jettera


For the most part, vehicles with two rows of seats have four doors, two for the front passengers and two for the rear. In the United States, however, there exists a very special VW Jetta with five seats but seemingly just two doors.

We stumbled across this image on Reddit in the appropriately named Shitty_Car_Mods subreddit. It was taken somewhere at a shop in the U.S., perhaps in Michigan, and shows a Jetta that’s had its B-pillar cut and the front and rear doors connected together. Odd doesn’t even begin to describe it.

Read Also: Jetta Brand A Hit In China With 30,000 Sales In Its First Three Months

Explaining this weird contraption isn’t easy. One possibility is that this Jetta is still very much a work in progress and the doors were joined together just for a bit of fun. What is particularly weird is how anyone could think it is a good idea to completely remove the B-pillar of a car like this, inevitably impacting its structural rigidity and putting occupants at risk should they ever be involved in an accident.

Driving around in a car with doors like this would also be extremely inconvenient. In fact, the front-seat passenger has to swing open the massive door almost fully to get in and out, making it a recipe for disaster in a cramped parking lot.

The weird design led one commentator to call these “homicide doors,” a name inspired by the suicide doors made famous by Rolls-Royce albeit for doors that are much less practical. And much more dangerous.


If there’s something they teach in criminal school, it’s to never become the subject of a police chase because those never end well for the person running from the cops.

The driver of a Chrysler 300 apparently missed that lesson as he found himself involved on the wrong side of a major pursuit operation in Long Beach, California on April 22. As reported by NBC Los Angeles, the man was wanted in connection with an assault with a deadly weapon.

Police officers spotted the blue Chrysler 300 on the 110 Freeway at around 3 p.m. and went in pursuit. The chase continued onto the eastbound Artesia (91) Freeway in the Paramount/North Long Beach area. The suspect led them on a chase to downtown Los Angeles, where he ran a red light and crashed into another car.

Watch Also: Not So Smart Driver Tries To Outrun Police In Arizona With A ForTwo

That didn’t stop him as he then got back onto the 91 Freeway in his attempt to outrun the cops. His Chrysler was seen dangerously changing lanes at high speeds until he hit a black pickup truck, spinning it around.

The impact caused significant damage to the Chrysler 300, forcing the driver to pull over on the freeway. The accident brought the 20-minute police chase from downtown Los Angeles to the Long Beach area to a halt, with police officers arresting him after a lengthy standoff during which both sides of the freeway were closed.

As the shirtless man exited and re-entered the car several times, officers kept negotiating until they made their move and arrested the suspect without hurting him. 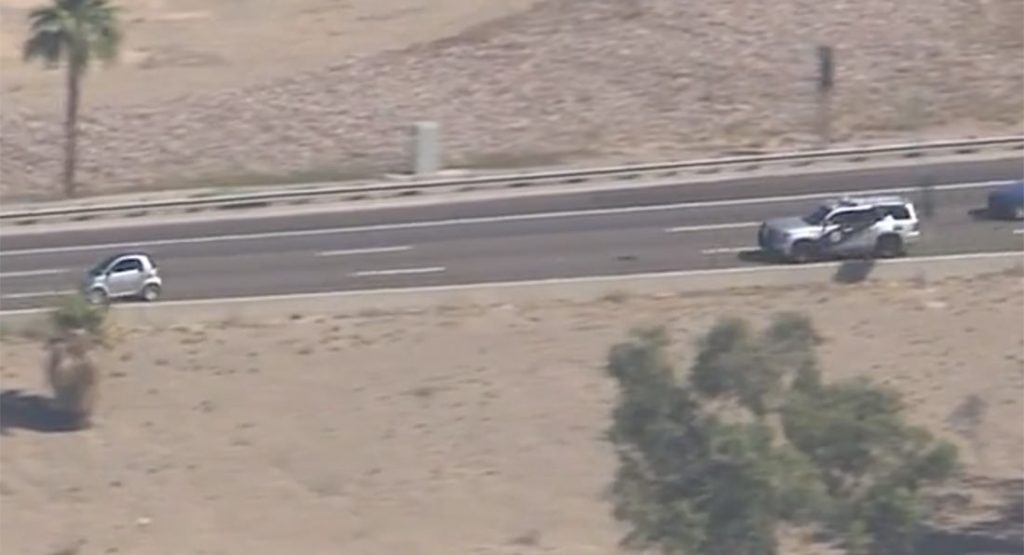 
The driver of a Smart ForTwo in Phoenix, Arizona has been apprehended by police after leading them on a lengthy chase along Interstate 10.

Fox 10 reports that police in the area of Gilbert first responded to reports of a suspicious man screaming in a Walmart parking lot. The man refused to speak with authorities when they arrived on the scene and got in his car and took off.

It is understood the Smart car was pursued by police but refused to stop and ran multiple red lights. A media helicopter followed the Smart on Interstate 10 for over 40 minutes. Interestingly, the only time a police vehicle is visible in the clip is towards the start as it is reported police terminated the chase at some stage.

However, it appears as though the chase was called back on as the driver was eventually taken into custody after being put-maneuvered by a Ford Explorer police vehicle.

Nevertheless, it is rather entertaining to see the tiny Smart car cruising down Interstate 10 without a care in the world and without any police in sight. The example involved in the chase looks to be a second-generation model that was sold with either a 0.8-liter diesel, a 1.0-liter petrol, or a 1.0-liter turbo. While we don’t know the engine powering this ForTwo, none of them will do more than 90 mph (145 km/h). Had police wanted to chase after the Smart car along the highway, they wouldn’t have had much difficulty keeping up.

The moral of the story? Fleeing police isn’t Smart.

#BREAKING: SkyFOX is following a vehicle that was involved in a DPS pursuit on I-10 in the Phoenix area.WARNING: Viewer discretion advised.LATEST: https://bit.ly/2x074ap

The reputation of Ford Mustang drivers is clearly not good (just google Cars and Coffee) and the following story doesn’t do anything to improve it.

On the contrary, it only serves to strengthen the stereotype that many Mustang drivers don’t really belong behind the wheel of a pony car. This particular driver of a rental Ford Mustang GT Convertible made a very expensive mistake when he pressed the gas pedal instead of the brake in the parking lot of a car dealership in Scottsdale, Arizona. And not just any new car dealer, but a luxury one.

The confusion resulted in the Mustang GT smashing into a parked car and, since the scene of the incident was DDW Partners, a dealership specializing in high-end automobiles, said vehicle was a brand new Rolls-Royce Dawn convertible.

Watch Also: COVID-19 Might Have Canceled Cars And Coffee, But Mustang Owners Can Still Find Ways To Crash

“A guy in a rental Mustang hit the gas instead of the brake, lost control and slammed in to a brand new Rolls-Royce,” wrote the dealership in a post on its Facebook page. “Is anyone surprised it was a Mustang?”, the text description added.

Probably not, but you will be surprised to see the amount of damage on the Mustang GT Convertible’s front end compared to the Dawn. The pony car’s bumper has been completely destroyed and got detached from the vehicle, the hood and right front fender are dented, and the headlight does not appear in good shape either.

So what about the Rolls-Royce Dawn? Well, the British super luxury convertible seems to have absorbed the crash energy much better. The driver’s door and front fender were dented, with the front bumper getting superficially scraped as well. While it doesn’t look as bad as the Mustang, you can be sure the Dawn will cost a whole lot more to repair.

You’re never going to believe it. This just happened here in Scottsdale not long ago. A guy in a rental Mustang hit the… 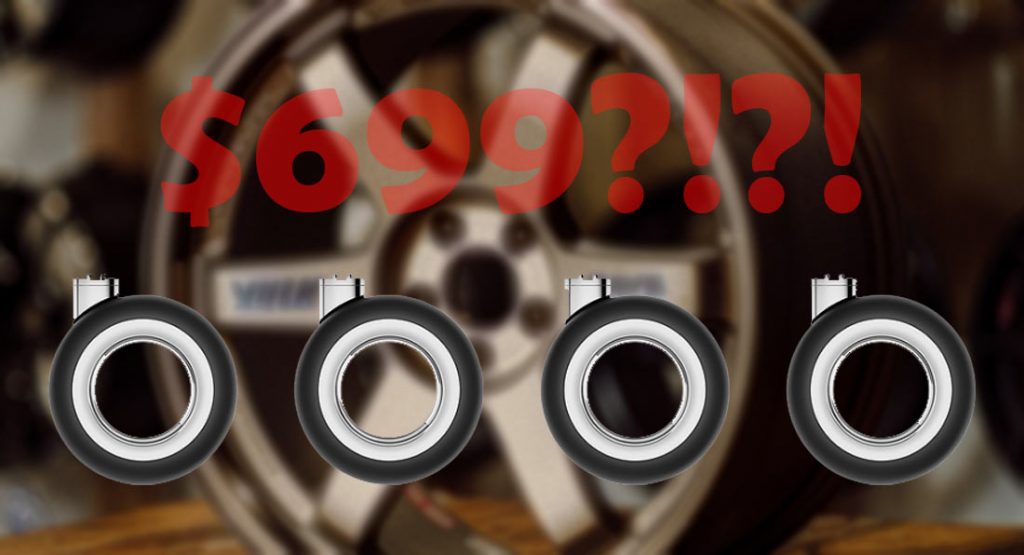 
If you own a fairly typical car, for example an affordable mainstream hatchback, crossover, or SUV, you won’t be hard-pressed to find a set of aftermarket wheels for less than $700. Admittedly, these wheels will be cast rather than forged but for the most part, affordable wheels from the aftermarket can do the job.

However, if you’re a company as big and powerful as Apple, you can pretty much slap any price tag on a new item and know that it will sell. Case in point, the wheel kit introduced for the Apple Mac Pro and priced at an eye-watering $699 in the U.S., more than many wheels for cars cost.

It is no secret that Apple likes to sell things at exorbitant prices. We’ll leave it up to you to decide if it’s worth paying, for example, $999 for a stand for its Pro Display XDR but charging $699 for a set of computer wheels does seem a little excessive to us.

The wheels are made from stainless steel and rubber, do look the part and undoubtedly feel much more premium than the plastic wheels you’re desk chair probably as.

If you’d rather not pay an arm and a leg for a set of computer wheels, Apple is selling a set of four stainless steel feet for the Mac Pro. They cheap only according to Apple’s standards carrying a price tag of $299. Interestingly, the Mac Pro comes standard with four feet already installed so the only people who’ll be buying the feet separately are those who splashed out $400 to have the wheels bundled together with the computer itself but have decided the feet better suit their needs. 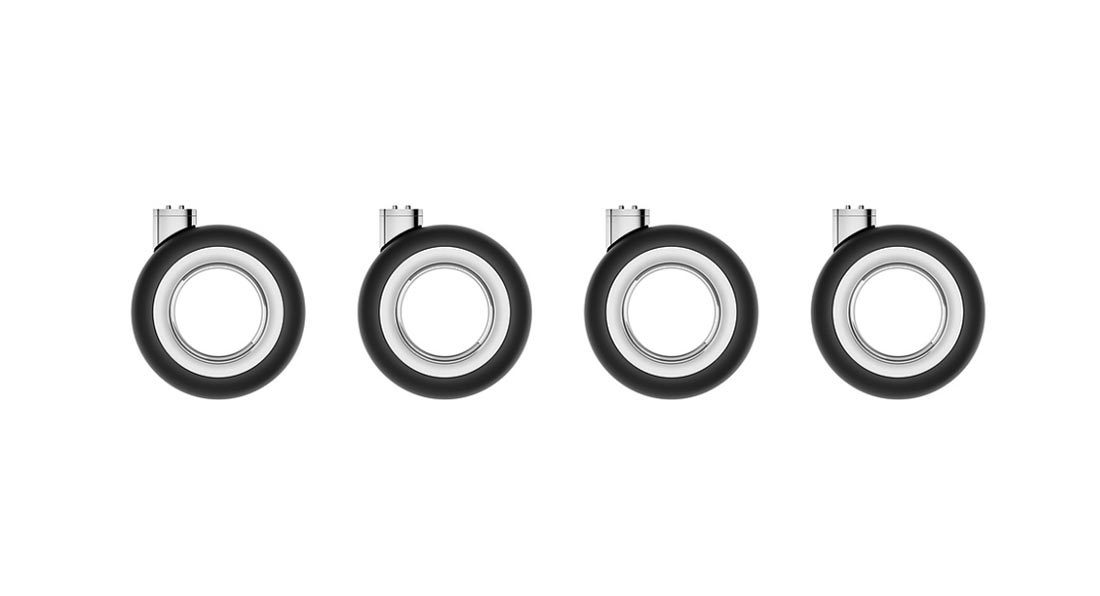 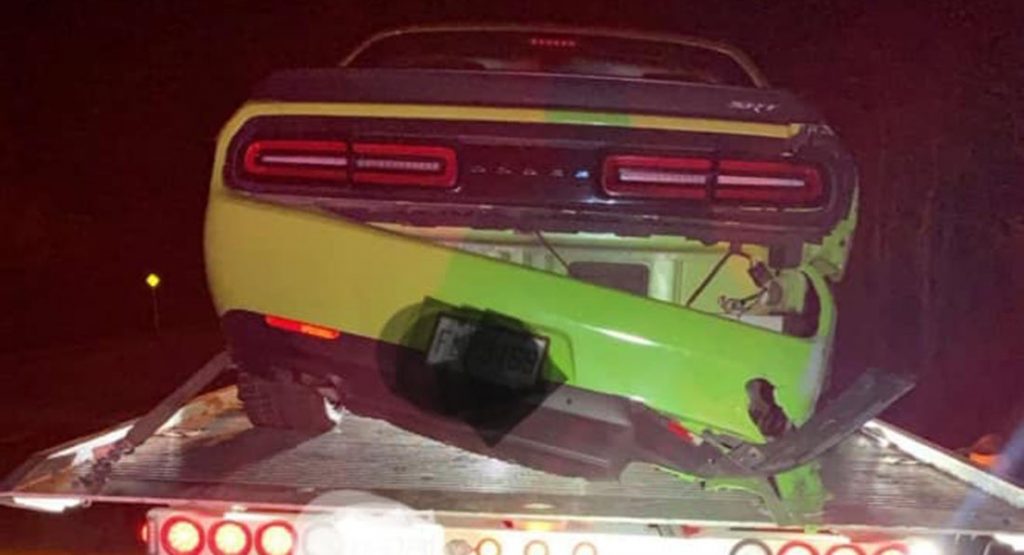 
The driver of a green Dodge Challenger SRT Hellcat is lucky not to have been seriously injured after he was caught doing 168 mph (271 km/h) in Ontario and suffered a high-speed tire blowout.

The Ontario Provincial Police say that the green Dodge was caught by an officer at the side of Highway 417 EB on Saturday morning in a zone with a 68 mph (110 km/h) limit, meaning he was doing well over double the speed limit.

Things then got particularly serious when one of the Dodge’s tires blew shortly after passing the police cruiser. The driver was able to bring the car to a stop without crashing and police soon caught up to him at the scene.

Two images of the Hellcat in question were published online by local police. They indicate that it was the passenger side rear tire that blew, causing comprehensive damage to the rear fascia of the car and pulling off part of the bumper.

The driver was charged for driving stunts, careless driving, and driving with cannabis readily available. His car has been impounded and he has lost his license for seven days, relatively small consequences for doing something so stupid on public roads.

It remains to be seen just why the tire of the Hellcat blew considering the car has a top speed of 199 mph (320 km/h). One possibility is that the driver hit an object on the road while on his high-speed run. It’s also possible that the tire had excessive wear and simply couldn’t cope with such high speeds.

This driver is lucky. He blew a tire at this unbelievable speed. No injuries, just a little damage. A Hawkesbury OPP…