Driven: 2022 Kia Sportage GT-Line 2.0 Diesel Will Knock Your Socks Off 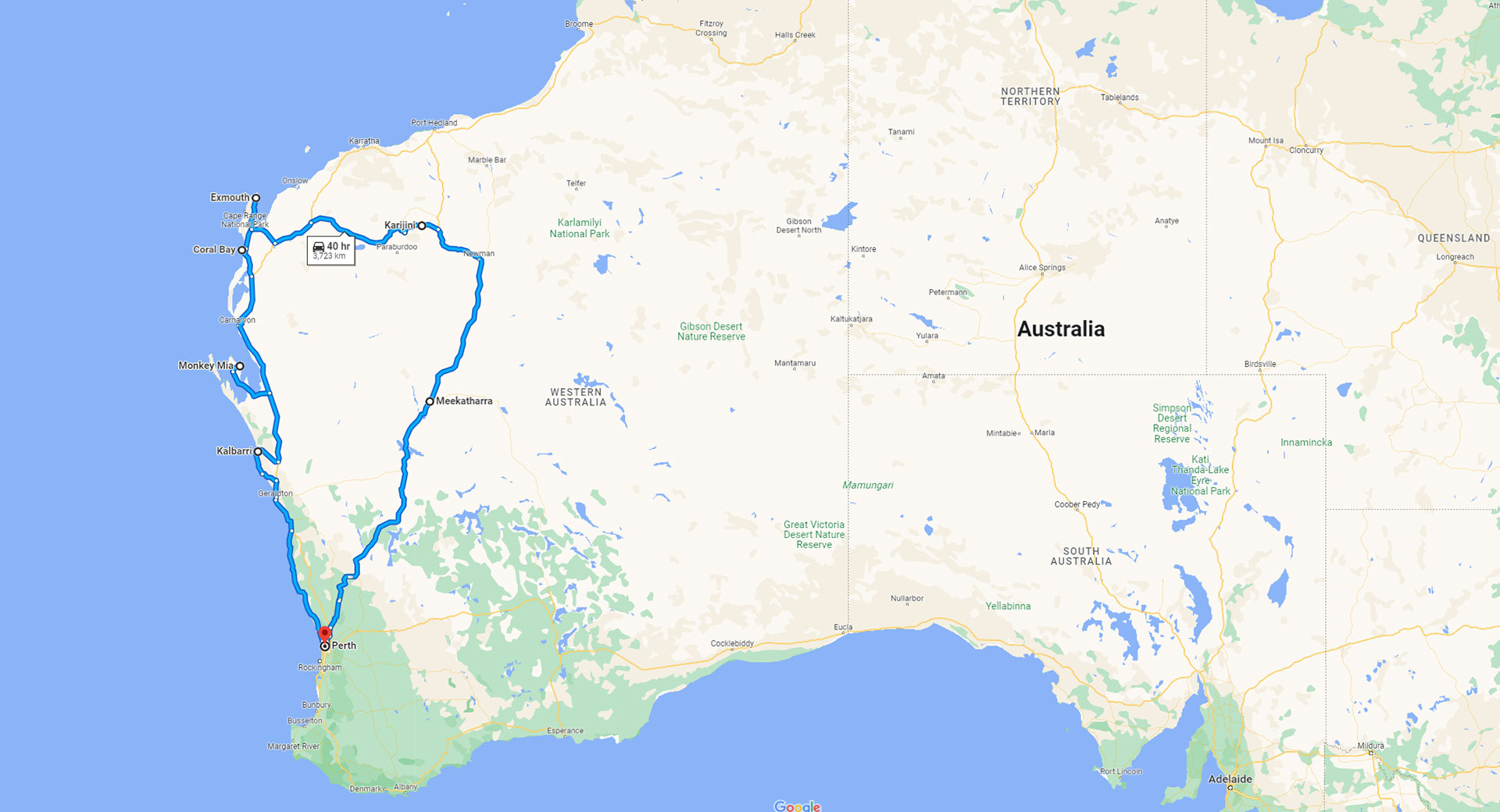 Since 1993, the Kia Sportage has been a constant in the automaker’s ever-changing line-up and now in its fifth generation, the Sportage isn’t just better than it’s ever been before but it’s also one of the very best mid-size SUVs out there.

When we typically do reviews, we have vehicles for a week and try to test them in as many conditions as possible and across various different road surfaces. When we locked in a review of the 2022 Kia Sportage GT-Line 2.0 Diesel AWD, however, we decided to embark on a much longer and more comprehensive test to see what it is really capable of.

Our journey would see us travel up the West Coast of Australia on a two-week journey that took us over 5,300 km / 3,293 miles (despite what the map below says). As a means of discovering just how far the Koreans have come with their SUV, this was one surefire way to do it.

Tthe new Sportage is based on the same Hyundai-Kia N3 platform as the latest Hyundai Tucson. In Australia, the engine and transmission options are identical for both the Sportage and Tucson but the Sportage is slightly bigger, measuring 4,660 mm (183 inches) in length compared to the 4,630 mm (182 inches) of the Tucson. Both share the same 2,755 mm (108.4-inch) wheelbase.

Our journey with the Sportage GT-Line 2.0 Diesel saw us drive up the coast from Perth to Exmouth before jutting inland to Karijini National Park and back down to Perth. The Sportage proved to be the perfect partner for such a journey.

An SUV that stands out from the crowd

Approaching the new Sportage for the first time, I was not won over by the design, although it did grow on me. Kia has abandoned the safe and conservative design philosophy that it pursued in the past and this is no more evident than with the new Sportage. Not only does it look unlike any other Kia model but it looks nothing like anything else on the road, making a very dramatic statement with those boomerang-shaped LED daytime running lights and the massive black grille.

It is a similar story when viewed from the side thanks to the dramatic lines and curves running along the doors, as well as the bold and eye-catching shape of the rear side windows. Kia’s designers also went to town on the SUV’s rear end with new LED taillights.

A cabin that everyone can love

Regardless of how you feel about the Sportage’s exterior design, it’s hard to deny that Kia has knocked it out of the park with the interior.

Whereas the design of the Tucson’s cabin feels a little uninspired and simple, the interior of the Sportage is anything but. Our flagship GT-Line variant comes as standard with a 12.3-inch digital instrument cluster and a 12.3-inch infotainment screen, both neatly incorporated into a curved panel that runs seamlessly across the dashboard and exudes a premium feel akin to the Germans.

Flanking the screens are dramatically-shaped air vents while located directly below is a wooden veneer that extends from the dashboard through to the front door panels. The Sportage GT-Line also has a dedicated touchscreen housing both the climate controls and important media functions just like in the EV6. As such, a quick press on the screen can adjust it from the HVAC settings to the media settings. It’s a neat way to avoid splitting the controls into two panels and thanks to the responsiveness of the slim screen, is very easy to use. 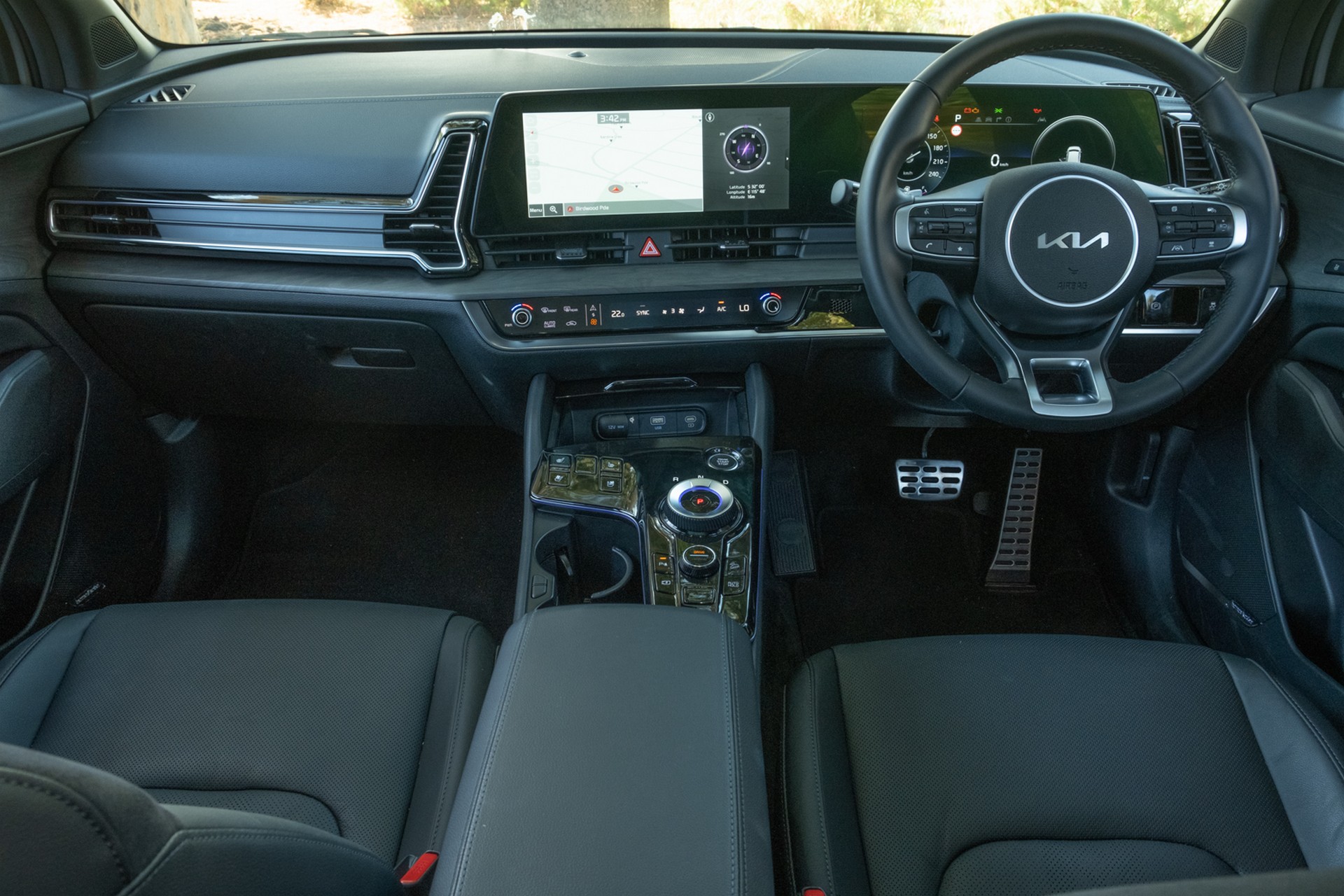 The transmission tunnel is where you’ll find a rotary shifter for the gears, as well as buttons for the heated and ventilated seats, plus the various driving modes. It’s beautifully laid out, although the overabundance of piano black may irk some buyers. Leather-appointed seats with lashings of artificial suede add to the premium feel, as do the eight-way power-adjustable driver and front passenger seats.

All told, the interior of the flagship Sportage is up there with the very best from the midsize SUV market. And on the road? It excels there too.

Very little can unsettle the Sportage

Setting off on our journey and with rain lashing the Kia’s windshield, we were immediately impressed with the visibility offered up by the SUV. Despite the steeply raked windshield and the seemingly compact side windows, the Sportage certainly feels more like a premium offering than its price tag may suggest.

Thanks in part to a local tuning program designed to make the Sportage perfectly suited to Australian surfaces, bumpy highway and country roads are an absolute breeze. The SUV feels composed along the coarsest of tarmac and it does an excellent job of soaking up bumps. This comes despite the fact that the GT-Line comes standard with 19-inch wheels.

The engine and transmission also suit the Sportage well. Much like the larger 2.2-liter turbo-diesel in the Sorento, the 2.0-liter unit found here is eager to respond and quiet, so much so that’d you’d be hard-pressed to even know that it is a diesel unless you’re a little too happy with the throttle. Response off the line is good and the eight-speed automatic performs well. However, we would have liked to see Kia’s dual-clutch find its way into the Sportage.

A handful of driving modes are available, including Eco, Normal, Smart, and Sport. They all say what they do on the tin and throughout our journey, we primarily used the Eco and Smart modes. The latter of these options is particularly good for use around town as it serves as a good middle ground between Normal where the transmission can be a little slow to respond whereas Sport is often a little too abrupt in its feedback, making it particularly hard to get off the line smoothly. We averaged 6.7 l/100 km (35.1 U.S. mpg) during our time with the Sportage, although that was heavily skewed towards highway driving.

Of course, it should come as no surprise that the Sportage performs well on the street. What we were particularly keen to discover was just how it would handle some more difficult surfaces, like driving on sand and along corrugated gravel roads with 100 km/h (62 mph) speed limits.

Is the Sportage even remotely rugged?

Our first opportunity to sample the Sportage’s off-roading abilities came in the small town of Coral Bay, known for its snorkeling. Reaching one of the most popular snorkeling areas necessitated us to navigate through a tight, twisting off-road area consisting of soft sand, deep ruts, and some pretty serious approach and departure angles. The Kia performed flawlessly and when we reached the beach, it certainly turned quite a few heads. After all, of the 30-plus vehicles on the beach, it was the only one that wasn’t a Toyota Land Cruiser, Toyota HiLux, or Nissan Navara.

It’s also worth noting that the Sportage GT-Line 2.0 Diesel doesn’t come equipped with the most off-road focused tires out there. In fact, it comes standard with Nexen Roadian GTX 235/55 touring tires but with the pressures dropped to around 15 psi, it performed very well. Admittedly, we did have to drive across the sand with more speed than most others around us, fearing that driving too slowly could see us get bogged. The only area that proved too much for the Sportage was a steep ascent up a sand dune but that obstacle was also too difficult for the Land Cruiser Prado in front of us. Nothing to be ashamed of, then.

We also took the Sportage through some of Australia’s infamous bulldust. This soft, powdery dust is found throughout the outback and deserts of Australia and is made up of very fine pieces of sand. When you drive across it, particularly at high speeds, it billows up huge clouds that can remain suspended in the air for several minutes. It was not too much for the Sportage to handle, however, and while it did completely cover the outside of the SUV, the cabin remained remarkably free of dust and the Kia was always easy to control. It even did a good job of passing along corrugated gravel roads, although admittedly not as well as a larger SUV with more advanced shocks and springs would.

It is hard not to be impressed by the new Sportage. It feels every bit as premium as the larger Sorento and also feels just as home when taken off the tarmac. In our opinion, midsize SUV buyers should seriously consider it.