Just as Hyundai pulled back the curtains on its ambitious new electric vehicle initiative last week, it got a stinging reminder of the perils ahead in electrification. The South Korean automaker said it will have to recall 82,000 EVs because of a potential for battery fires — a recall that will cost $900 million.

News of the recall came one day after Hyundai’s global reveal of its new Ioniq 5 EV, a potentially high-volume model that will kick off the company’s all-electric Ioniq subbrand this year.

The recall does not pertain to the Ioniq 5 but focuses largely on Kona EVs built between 2018 and 2020 that were sold mostly in Hyundai’s Korean home market. It will be necessary to replace the battery systems.

There have been 15 cases of fires involving the Kona EV — 11 in South Korea, two in Canada and one each in Finland and Austria.

But the recall also shines a light on a changing auto industry reality: When it comes to EVs in the future, automakers will be more reliant than ever on the performance of a single component supplier — the battery module maker.

Hyundai did not comment on the cause of the fires. But South Korea’s transport ministry said in a statement that some defects had been found in some battery cells produced at a factory in China owned by Hyundai’s supplier, LG Energy Solution, a division of LG Chem.

LG Energy was quick to deflect criticism. The supplier said in a statement that Hyundai misapplied LG’s suggestions for fast-charging logic in the battery management system, adding that the battery cell should not be seen as the direct cause of the fire risks.

Unclear in the situation as it developed last week was how the cost of the recall will be handled or to what extent — if any — the battery supplier will be financially responsible.

Hyundai would not provide details on the costs, saying only that it will first wait for the results of the transport ministry’s probe.

“How Hyundai handles this will set a precedent not just in South Korea but also for other countries,” said Lee Hang-koo, senior researcher at the Korea Institute for Industrial Economics & Trade. “It’s very significant for both Hyundai and LG, as we are in the early stages of the electric vehicle era.”

Reuters contributed to this report.

The Netherlands starts the year 2021 pretty well with a 40% increase in plug-in electric car registrations year-over-year to 4,683.

January was quite an interesting month as most of the sales were plug-in hybrids. According to EV Sales Blog, it has a lot to do with the car allocation and self-registrations of BEVs in the late 2020 to lower the average emission results.

There are no signs of the Volkswagen ID.3 or the Tesla Model 3 (the kings of 2020) among the top plug-ins in January.

On the other hand, we see tons of plug-in hybrids from manufacturers that not needed to rush in December 2020 – Volvo and BMW. The situation probably will start to normalize over the next few months. Then we will again see new BEV registrations in high numbers we believe. 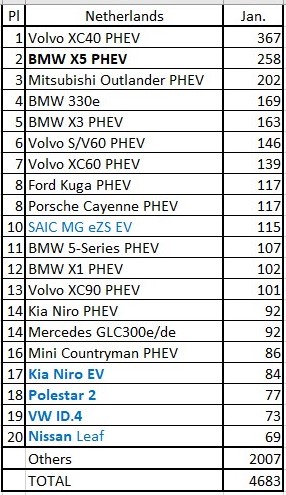 TURIN – Stellantis CEO Carlos Tavares has told Italian unions that he will work with them to improve competitiveness and cut production costs at factories in Italy, where they currently are up to four times more than in France or Spain for a similar model.

Tavares, who met with union representatives at two former Fiat Chrysler factories in the Turin area this week, said the problem was primarily not labor costs but production costs on models that did not sell in anticipated numbers.

Unions have been worried that the merger of PSA Group and FCA to form Stellantis, which was finalized last month, could result in job losses, especially in Italy. Tavares has pledged not to close any assembly plants in Europe as a result of the merger.

A union source who attended the meeting told Automotive News Europe that Tavares gave workers several examples of the cost discrepancy between the Turin-area plants and those at PSA plants in Europe.

Tavares said the Maserati Levante midsize luxury crossover incurred about 3,300 euros ($4,000) in direct production costs per vehicle at the FCA factory in Mirafiori, while the Ghibli and Quattroporte luxury sedans cost about 6,000 euros per unit at the nearby Officine Giovanni Agnelli factory in Grugliasco.

In contrast, Tavares said that direct production costs for a similar vehicle built in France, such as the DS 7 Crossback built in Mulhouse, would amount to about 1,400 euros.

He said the Fiat New 500 full-electric small car, which is built in another part of the huge Mirafiori complex, incurs about 1,200 euros of direct production costs, compared with 500 euros for the similar Opel Corsa-e built at the PSA plant in Zaragoza, Spain.

Three industry experts consulted by ANE for this article said direct production costs represent about 20 percent of the total production cost of a volume model, and up to 35 percent for low-volume premium and luxury models. Material accounts for the remainder.

Tavares reassured Italian unions that labor costs are not the main issue, noting that they are higher at PSA plants in France, but the direct production costs he cited added to worries about the future of the Grugliasco plant, a union source said.

“We feel that it would be very difficult to regain enough competitivity in Grugliasco, given such a wide gap to close not only on French plants, but even to nearby Mirafiori,” the source said.

FCA considered Grugliasco, a former Carrozzeria Bertone plant that it bought in 2009, as part of a single manufacturing hub with Mirafiori, which is about 3.5 miles away. That could make it easier to close Grugliasco and move workers to the Mirafiori plant. FCA had moved Maserati workers between the two plants according to model demand for years.

Grugliasco employs 1,149 assembly-line workers and Mirafiori 2,766, according to figures from the FIM-CISL union.

Tavares’s message to the workers is that future investments in former FCA plants in Italy should be “right-sized” to improve competitiveness – and not lose future model allocations to other Stellantis plants across Europe.

Industry experts say amortization of R&D, tooling and plant structural costs add up to about 15 percent of total production costs per unit for a specific model.

Those costs do not vary with the production volume.

“If you build half of the volume planned for a model, the weight of those costs doubles” on each car sold, an industry executive who asked not to be quoted by name told ANE. “If you build a fourth (of the planned volume), they quadruple.”

FCA invested 500 million euros at the Grugliasco plant to launch the Quattroporte in 2012 and the Ghibli a year later. Maximum installed capacity was about 30,000 units annually on two shifts a day, and combined production of the two models peaked at 36,100 in 2014, according to FIM-CISL figures. But total production was just 6,900 in 2019 and fell further to 6,676 last year.

Then in 2014 FCA invested an additional 300 million euros at the Mirafiori complex to install a new manufacturing line, including a paint shop, dedicated to the Maserati Levante crossover. The Levante, which shares its architecture with the Quattroporte and Ghibli, had a good start, with production peaking at 33,960 in 2017.

According to union figures, total Maserati production was 17,694 last year, with 11,018 Levantes at Mirafiori and the rest Quattroportes and Ghiblis at Grugliasco.

The Mirafiori complex was one of the world’s largest auto plants when it was inaugurated in 1939 by Fiat founder Giovanni Agnelli and the Italian fascist leader Benito Mussolini. At its peak, more than 50,000 people worked at Mirafiori. By 1997, 26,500 workers built 463,000 vehicles.

It now employs a total of 10,000 production workers and 7,000 office workers, mainly in marketing and sales, R&D and administration. It houses the Levante and New 500 production lines, a stamping facility, a powertrain plant and most of Stellantis’ Italian administrative and engineering workers.

Last year Mirafiori produced 30,026 vehicles, according to the FIM union, of which 19,008 were Fiat New 500s and the rest Levantes.

Tavares has visited other Stellantis plants in Italy recently, and a union source said he was impressed by a level of automation at Cassino and Melfi that was considerably higher than at comparable former PSA plants.

Increasing factory automation was a strategy put in place in the mid-1980s at FCA’s predecessor, Fiat Auto, as a reaction to conflicts with unions in the previous decade, which peaked when workers occupied the Mirafiori plant for 35 days in October 1980.

But seen another way, the high level of automation at those factories — another form of overinvestment — might be a barrier to reducing costs. The initial, costly investment needs to be amortized, and overall flexibility is significantly reduced, because humans can be instructed to make things differently faster that machines can be reprogrammed, the union source said.

Should You Shortlist The 2021 VW Golf GTI Clubsport If You’re Looking For A Hot Hatch?


Despite the onslaught of SUVs and the rising tide of EVs, the hot hatch market right now is as exciting now as it’s ever been and one of the newest entrants into the segment is the VW Golf GTI Clubsport, which promises to be a significant upgrade over the standard model.

While the Golf is now in its eighth generation, some recent reviews of the GTI have suggested that it doesn’t really feel like much of an upgrade over the Mk7 model. It is also massively underpowered compared to its rivals – and that’s where the GTI Clubsport comes in.

In addition to being more powerful than the standard GTI, the Clubsport is fitted with a VAQ electomechanical locking front differential. It also has increased camber at the front, a new control arm mount at the rear, new wheel mounts, bespoke damper bearings, and new springs.

This comprehensive review from Autogefühl provides a detailed tour of both the exterior and interior of the car, which is also taken out to the street and put to the test. The roads were very cold and covered in a light dusting of snow, though, making it hard to test the car’s handling. Nevertheless, it’s a review well worth watching.

California’s Gunther Werks returned this week with another carbon-bodied stunner based on the 993-generation 911. This time the company delivered a wide-body speedster to complement its coupe from a few years back.

The first model based on Hyundai Motor Group’s E-GMP dedicated electric-vehicle platform was revealed this week in the form of the 2022 Hyundai Ioniq 5. The vehicle is a handsome crossover coming to dealerships this fall as a challenger to the Tesla Model Y and Volkswagen ID.4.

Last year Gordon Murray showed off the T.50 supercar as a spiritual successor to the McLaren F1 he designed in the early 1990s. This week he revealed an even more extreme version of the T.50 designed for track use.

Land Rover announced some tweaks being made to the Defender for 2022. Among them is the long-awaited availability of a V-8 powertrain, specifically a 516-hp version of Jaguar Land Rover’s familiar 5.0-liter supercharged mill.

The redesigned 2022 Mercedes-Benz C-Class was revealed. It’s an impressive sedan (and wagon if you live outside the United States), though sadly there aren’t any 6- or 8-cylinder engine options planned—not even in the high-performance variants from AMG.

Formula One driver Sebastien Vettel accumulated an enviable collection of Ferraris during his career driving for the Italian supercar maker. Now he’s off to Aston Martin, so he’s selling off those fabulous cars. Luckily, Aston Martin makes some desirable cars, too.

Another hypercar in the headlines this week was the new 007 Le Mans Hypercar racer from Scuderia Cameron Glickenhaus. The new season of the World Endurance Championship is nearly upon us, and the 007 has just made its initial shakedown test ahead of April’s season opener in Portugal.

And finally, BMW was spotted testing a prototype for its next M2. We currently expect the car to debut in 2022 with a detuned version of the 3.0-liter twin-turbocharged inline-6 borrowed from the M3 and M4.