Angry Trucker Drives Over His Boss’ Ferrari GTC4Lusso In Chicago After Disagreement! (Updated) 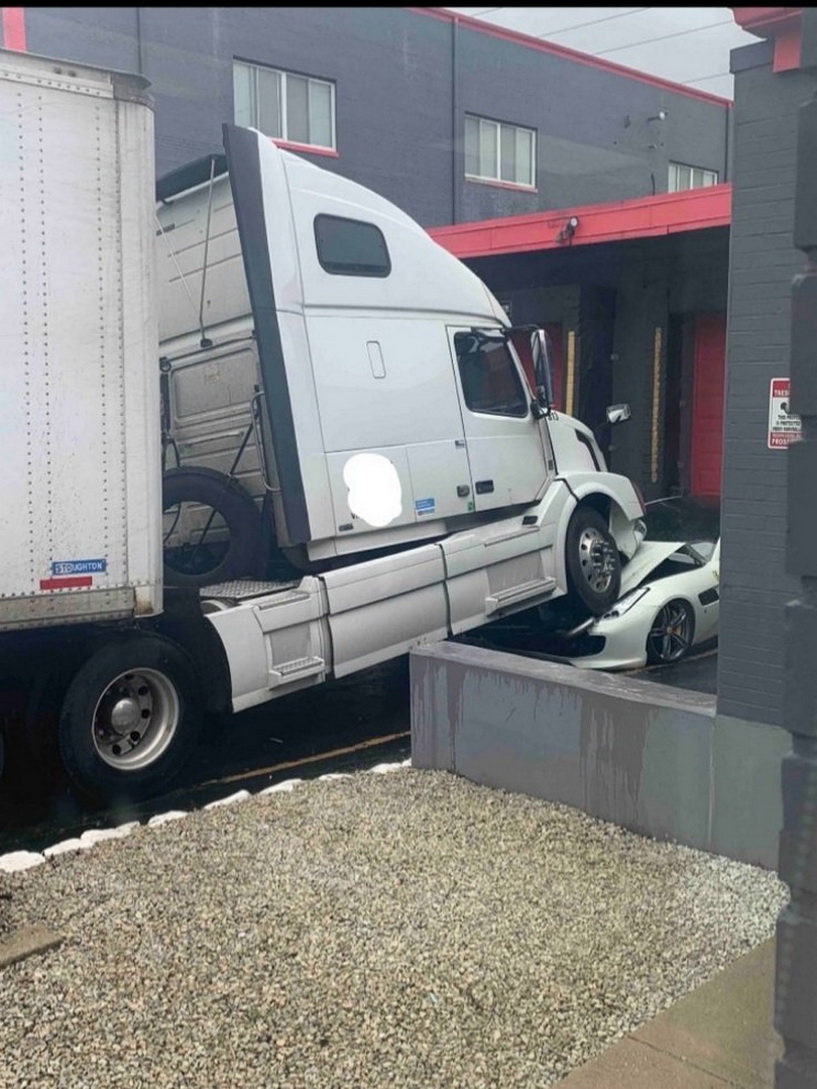 An unbelievable incident surrounding a purportedly disgruntled trucker in Chicago who drove his semi on top of his boss’s Ferrari GTC4Lusso has been making the social media rounds since last night.

We’re still digging for details, including to confirm the circumstances that led to this episode as well as the identity of the involved parties. Meanwhile, a number of Illinois truckers posting on social media seem to agree that the impulsive truck driver purposely ran over the transportation company owner’s Italian exotic after a disagreement. The crash apparently happened sometime over the past few weeks.

So, what really happened?

Now, here’s where the details get murky. A few, seemingly more credible, second-hand accounts are claiming on social media postings that the unnamed trucker did so after being denied a newer semi, which sounds insane, yet insanity is the only thing that would explain what we’re seeing in the pictures if this is not an accident – something we obviously can’t rule out yet.

“This driver was promised a 2020 truck but he was not producing enough to get a 2020 truck so he was denied the new truck… He got mad and slammed the truck on the owners car out of anger !!! I seen the actual video with voice and is on video the whole incident!” wrote Cordoba Beto, an Illinois driver on a Facebook posting on United Truckers.

Posted by United Truckers on Thursday, May 7, 2020

On the same thread, another truck driver, Viktor Furce, said: “They agree when the driver came in Chicago to start driving a new truck ,and they offer him a 2019 Volvo with 50000mil and he refused to drive that 2019 Volvo asking for 2021 and he start yelling to everybody, and after couple of minutes he drove the truck into the owner of the company who was in front of that Ferrari trying to kill him.”

Other accounts are claiming that the trucker in question jumped out of the semi right before it toppled the expensive Ferrari, which is worth between $200,000 and $280,000 in the used car market.

Some postings on Reddit supported (falsely, from what it seems) that the trucker lost his marbles after the company owner stopped paying his drivers, but from what we can deduct, that doesn’t hold true.

After checking out some additional photos of the incident that were shared on imgur by Reddit user Nemomilo and who claims to have received them from a friend, in one of them, it appears that the trucking company is named “Surehaul Inc” with a USDot number 1752290. However, when we called in this morning to see if we could verify it, we were told by an employee that “you have the wrong information”.

We’ve reached out to a multitude of sources that have spoken out about the incident and we’ll post an update if and when hear back from them. In the meantime, if any of you have additional information and/or material, please send us an email at tips(at)carscoops.com and we’ll get back to you.