Asako Hoshino, who earlier this year succeeded Daniele Schillaci as Nissan’s global sales and marketing boss, is determined to highlight the automaker’s “superior advanced technology.” This includes two features the Jpanese automaker plans to extend beyond its home market: ProPilot 2.0, a semi-autonomous system that enables hands-free highway driving, and e-Power, a hybrid solution that uses a small gasoline engine to charge a battery that runs an electric motor, which then turns the wheels. While it will take time for ProPilot 2.0 to get approved for use in Europe, where hands-free driving is not allowed, e-Power is set to debut in the region in 2022. Hoshino spoke about the positive effects she expects from the rollout of Nissan’s newest tech solutions in an interview with Automotive News Europe Managing Editor Douglas A. Bolduc and Automotive News Staff Reporter Urvaksh Karkaria.

What steps is Nissan taking to get back on track?
We have to make the customers understand what the superiority is of our technology. To do this we have to create a foundation for the Nissan brand. At the moment I don’t think the foundation is strong enough to convince customers [in Europe and the U.S.] that Nissan has superior advanced technology. We have this reputation in Japan but not in Europe and the U.S. We are currently developing the foundation of the Nissan brand.

How will Nissan convey this message?
This journey has to be done with the dealers. We believe that Nissan has superiority in technology but the dealers have to be together with us, otherwise we cannot get the customers to believe.

How will you change perceptions?

We are introducing new technologies such as ProPilot, e-Power and EVs. Technology plus vision is really important. How can Nissan promote that our brand is different from the others? The first is to convey that it’s in our DNA to: “Do what others don’t dare to do.” DNA is something that you cannot explain. Our engineers are completely motivated to be the first to bring new technologies to market. A perfect example is ProPilot 2.0 [a semi-autonomous system that allows for hands-free highway driving from on-ramp to off-ramp]. It is the first of its kind in Japan.

How do you balance your motivated engineers with less motivated regulators?
If the regulators are not motivated we will have to provide them with the exact figures that show how much Japan has been able to reduce fatalities caused by vehicles [that use advanced technology]. What can you trust more human beings or technology? That is really a big question mark.

Nissan is preparing to debut an EV crossover. Why is now the right time to do this?

The market is ready to accept such a car. It took a lot longer than we expected [for people to accept full-electric cars], but gradually people have become accustomed to this. At the same time global environmental issues, such as there being bigger typhoons and the melting icecaps [are boosting interest and acceptance in emissions-free driving solutions].

Why does Nissan believe e-Power will be a success in Europe?

Europe is the first region [outside of Japan and parts of Asia to get e-Power] because the EU is really serious about reducing CO2. Because of this strong push from the government we really have to rapidly move toward electrifying our lineup. Therefore, we have to accelerate the introduction of EVs as well as e-Power in Europe.

How will Nissan roll it out?

I can’t talk about the specifics but when it comes to e-Power, no one else in the world has this technology at the moment. Therefore, this is definitely our differentiating point and a true strength. That is why we plan to launch e-Power in both regions [Europe and the U.S.].

Will every model in your European lineup be electrified?

The Z4 traces its roots back to the BMW Z3 that was first released in 1996. It’s been a fun and friendly sports car in coupe and convertible body styles through three generations, but it took a partnership with Toyota to create a fourth generation. That deal left BMW with the roadster and Toyota with the coupe.

BMW takes the premium road and offers higher-end interior appointments, a choice between a turbo-4 or turbocharged inline-6 engines, and the open-air fun of a convertible top. It also costs about $10,000 more to start. The coupe was offered briefly for 2019, although it’s the turbo-6 introduced for 2020 that has its gunsights set on our annual awards.

The Z4 gets a power softtop this time around rather than a retractable hard top. That’s fine by us as the little roadster has less weight to carry around, and a roadster lives its best life with the top down anyway. The design is sleeker—lower, wider, and less visual mass along the sides—though it has an overabundance of cutlines and a larger, wider version of the BMW twin-kidney that will appeal to some and not others.

With thrilling performance in every edition, the 2020 BMW Z4 M40i has its sights set on our annual award. Is it enough? (Nathan Leach-Proffer/For Motor Authority)

On the road, acceleration is exceptional with either engine. The little turbo-4 overachieves and delivers its likely understated power better than any other 2.0-liter turbo. The inline-6 turns the roadster into a rocket—and it puts many V-8s to shame.

The Z4 comes alive when the road turns twisty, which is the mission of any roadster. Its suspension expertly balances agile moves with a comfortable ride quality. The Z4 is a little tail happy, which can be exacerbated by the inline-6’s ridiculous power.

The new BMW Z4 shuttles power to the rear wheels via an electronically controlled rear differential that can hesitate in hard cornering. Did we mind? Check out the results Jan. 2. (Nathan Leach-Proffer/For Motor Authority)

The handling suffers at the limit, too. The rear-end doesn’t feel tied down, and it tends to rock from side to side in high-speed corners as the electronic limited-slip rear differential locks and unlocks. The result is a lack of stability that hurts racetrack performance.

Still, most drivers won’t ever feel that flaw as it requires pushing the car well past what is safe on the street. Most buyers will think the Z4 is a sweetheart that rides and handles like cars of BMW’s 1990s and early 2000s heyday.

Will that be enough to make the reborn BMW Z4 the Motor Authority Best Car to Buy 2020?

Check back with us on Jan. 2 when we announce the winner of this year’s award. We’ll also announce the winners from our sister sites, The Car Connection and Green Car Reports. The Car Connection will also reveal the best vehicles in 15 categories to help you choose the best the cars, trucks, and SUVs for your needs. Finally, be sure to vote for our annual Driver’s Choice awards and tell us what you think is the best in every category.

I agree to receive emails from this site. I can withdraw my consent at any time by unsubscribing.

I agree to receive emails from this site. I can withdraw my consent at any time by unsubscribing. 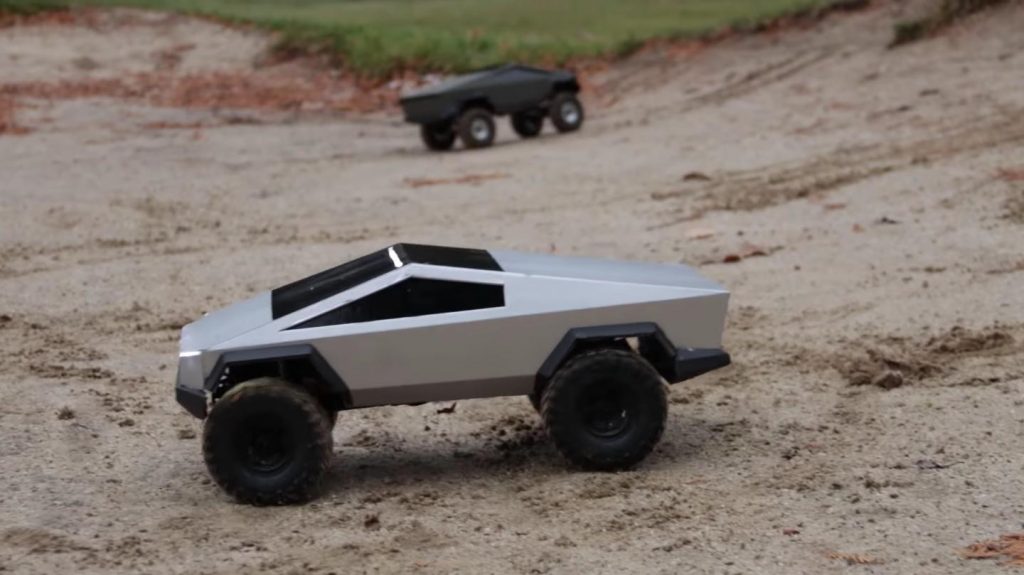 
If the Tesla Cybertruck impressed you greatly but you’re not willing to wait until 2021 to get one or you don’t really believe it’s going to happen, you can always get your fix right now with a remote controlled scale model.

This material is very easy to shape and also offers the structural rigidity necessary to get a sturdy Tesla Cybertruck R/C vehicle.

Related: Someone In Russia Has Made A Functional Tesla Cybertruck Replica

As you’ll see in the video, the guys did not stop at making a Power Wheels-based Cybertruck – they also used a more professional Traxxas R/C car as a basis. That particular Cybertruck is able to reach speeds of up to 60 mph (96 km/h) which is insane for an R/C vehicle.

In the end they built three Tesla Cybertruck toy pickups that look pretty realistic, especially in a natural environment where their scale flies under the radar and seem to be quite fun to play with.

A special mention goes to the Power Wheels Cybertruck because it’s an electric vehicle just like the real-life pickup. Don’t worry: if you’re not as good with handiwork as these guys, you’ll find plenty of Cybertruck kits on eBay and other similar websites.

So about three years ago, Young, the dealer operator of Wayne Akers Ford in Lake Worth, Fla., near West Palm Beach, got rid of them all.

He says he didn’t fire anyone but instead redefined employees’ roles as part of sweeping changes to the dealership experience in a bid to make Ford cool in a diverse community where many consumers wouldn’t give the brand a second thought.

Before customers ever walk into the showroom, they can browse inventory and speak with representatives at off-site kiosks sprinkled at partner locations throughout South Florida. When they enter the building, they’re greeted by a concierge, who helps direct their experience. Only upon request does a product specialist come from the back to answer more detailed questions about a specific vehicle.

The experience, which Young calls Innovation Through Information, has drastically altered all aspects of Wayne Akers Ford. The showroom — he likens it to a cross between a high-end hotel and an Apple store — is now filled with paintings and installations from local artists. There’s space for parties, art galleries and other community gatherings, and a cafe that makes fresh food daily.

Beyond the showroom, Young and a group of concierges travel around the area to black-tie dinners, NFL games and charity events to increase awareness about the brand.

“I don’t go for the 10 percent of customers in the market; I go after the 90 percent that aren’t,” Young told Automotive News. “I went after the people that would never even consider Ford unless they wanted a truck: artists, lawyers, musicians. These people do like us — if we engage.”

The effort has improved the perception of not only Young’s dealership but also other Ford stores in the area. Young, chairman of the South Florida Ford Dealers Association, said the region has risen from near the bottom to No. 2 nationally in customer consideration of Ford.

“In South Florida, you have to be cool,” Young said. “I changed the whole store to go after influencers who are not in the market.”

Many of those include artists whom Young has introduced to the dealership through a program called StArt, which gives local creators space to network, display and sell their work, with proceeds going to various charities. Young says the rotating collection of artwork displayed in the showroom helps customers feel more at ease.

The changes have had a big effect on the staff as well.

“I couldn’t hire one or two young people in a million years,” he said. “But I redefined all the positions, and now it’s cool to work here.”

Young hopes Ford will expand his Innovation through Information model to other dealerships. Despite the improved perception of the brand, the model hasn’t yet produced a noticeable bump in sales, although he says the dealership consistently hits its sales targets. On average, Wayne Akers sells 3,000 new and used vehicles per year.

Young expects sales to rise in 2020 as the automaker introduces new vehicles such as the Bronco and Mustang Mach-E.

“If you have the experiences, your consideration will be there,” he said. “Sales are going to come as soon as the product comes.”